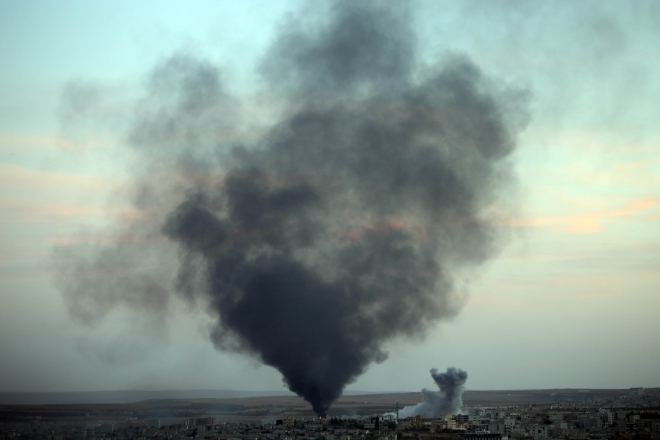 The Syrian part of Obama’s anti-ISIS strategy was always a deferral. He seems not to have thought it through, perhaps because he didn’t think he’d have to. It would be hard, and take long, enough to “degrade and destroy” ISIS before he’d have to deal once more with Assad. He didn’t count on two factors. First, ISIS-in-Iraq and ISIS-in-Syria turn out to be inseparable; it’s hard to fight one without contending with the other. Second, America’s allies in the region—on whom Obama’s strategy depends—have interests that are at times at odds with American interests. This becomes a problem in coalition warfare. ISIS, in fact, gains much of its strength from the fact that the countries arrayed against it—which, together, could win in short order—can’t get their act together; they have too many conflicting interests tearing them apart.

He zooms out to conclude:

The international system in which we all grew up, the system of the Cold War, has shattered, and nothing has taken its place. There are no real power centers. Nations, even small and medium-sized ones, are freer to pursue their own interests, which often collide with ours. Large nations have less leverage than they once did, and it’s harder to coerce or persuade other nations to put our interests above their own. Obama is in a tight position (and future presidents should take note, because they will be, too): He may have to succumb to mission creep—or slowly, carefully, creep away.

I hope it’s the latter. There’s no way this clusterfuck can do anything coherent over the longer term. The Turks’ ambivalence – even with ISIS controlling a hefty chunk of their border with Syria – tells you everything you need to know. I agree with this reader:

1) In 1983, antecedents of Hezbollah bombed the shit out of military barracks in Lebanon, murdering over 200 US Marines. US officials made a bunch of noise about how they won’t be deterred. Less than 6 months later, Reagan had us get the fuck out of Lebanon. The Lebanese proceeded to murder each other for another 7 years before they got tired of it and stopped.

2) In 2014, two American journalists are murdered by a bunch of guys in the desert. Obama responds by having us get the fuck inside Iraq and Syria, two countries mired in slow burning civil wars.

And by publicly engaging with these idiots on the battlefield, Obama and every other US politician raises ISIS’s profile, drawing more recruits and terrorist funding to their cause.

I despair at how few Americans understand the psychology of power and lose their collective shit and demand engagement when a group — that is so self-destructive it would otherwise burn out on its own — cuts off a couple American heads. I also despair at the American politicians who understand the psychology of power intimately well, but (a) are too ignorant to understand it applies to foreigners as well, or (b) are too singleminded in their power games against Obama to care.

And finally, I despair at Obama, who I assume knows better.

I know it would have been tough to counter the politics of hysteria and fear this summer. But Obama should have been tougher in pushing back an unreconstructed neocon narrative that has now taken hold. God knows the Democrats are useless in articulating a policy of minimalism in confronting this kind of terror – but without a president leading with the case, actually proudly defending his reluctance to get mired in quag again, there’s no hope at all. He was just too weak.

Fredrik Logevall and Gordon Goldstein fear that Syria will become for Obama what Vietnam was for Lyndon Johnson:

War has a forward motion of its own. Most of Johnson’s major steps in the escalation in Vietnam were in response to unforeseen obstacles, setbacks and shortcomings. There’s no reason the same dynamic couldn’t repeat itself in 2014.

And there is a political logic, too: Then as now, the president faced unrelenting pressure from various quarters to do more, to fight the fight, to intensify the battle. Then as now, the alarmist rhetoric by the president and senior officials served to reduce their perceived maneuverability, not least in domestic political terms. Johnson was no warmonger, and he feared, rightly, that Vietnam would be his undoing. Nonetheless, he took his nation into a protracted struggle that ended in bitter defeat.

Larison holds the president responsible for setting the self-fulfilling logic of escalation on its course:

Presidents trap themselves into pursuing unwise escalation in foreign wars because their earlier decisions and past rhetorical overkill seem to compel it. Unfortunately, the administration has repeatedly combined careless rhetoric with a tendency to yield sooner or later to hawkish pressure. By indulging in the former (e.g., talk of “destroying” ISIS or claiming it is an “imminent threat to every interest we have”), Obama and his officials give hawks the opening they need to demand more aggressive measures. Having already endorsed most of the hawks’ assumptions about the conflict, the administration makes it very difficult for itself politically not to give in to those demands. At best, Obama has created an open-ended conflict that his successor will be forced to continue. Given Washington’s bias in favor of throwing more resources at a problem when a policy hasn’t succeeded, it is quite likely that the next administration will conclude that Obama’s policy didn’t “work” because it was insufficiently aggressive.

Waldman throws up his hands at the lessons America clearly hasn’t learned from our experience in the Middle East over the past 13 years:

It would be wonderful if the current campaign renders ISIS impotent. It would also be wonderful if the Syrian civil war wrapped up soon, with the Assad regime replaced by an inclusive democracy in which everyone’s human and civil rights are honored. But realistically, chances are that in two years time Barack Obama will bequeath to his successor a situation that is still unresolved and still bad (though perhaps in ways we haven’t even yet imagined). And no matter who that successor is, the answer he or she offers to the question of Syria and Iraq — and whatever questions follow — is likely to be more military actions. That president will either be Hillary Clinton, who throughout her career has been one of the most hawkish Democrats around, or it will be a Republican who is even more hawkish.

(Photo: Smoke rises from the clashes between Islamic State of Iraq and Levant (ISIL) and Kurdish armed troops in Kobane (Ayn al-arab), Syria, on October 9, 2014. By Ibrahim Erikan/Anadolu Agency/Getty Images.)