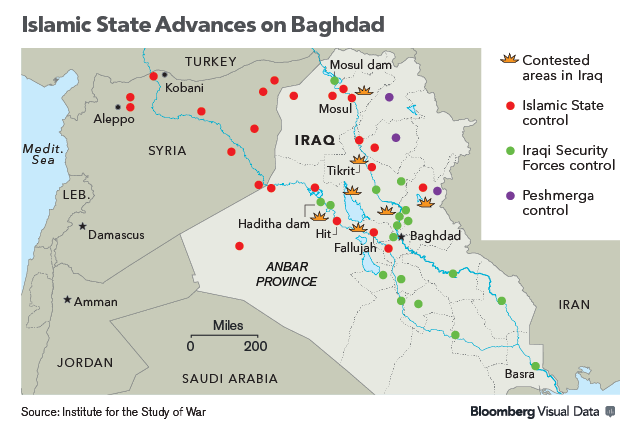 Recent gains by ISIS in western Iraq’s Anbar province, including the capture of a military base on Monday, are raising fears that the militants might soon attempt to move on Baghdad:

Militants seized the base, located near the town of Hit and a major highway from Baghdad to the Syrian border, after heavy fighting with soldiers, according to Ahmed al-Dulaimi, a Sunni tribal leader. Its capture increases the threat to Ramadi, Anbar’s capital, and to Iraq’s second-largest dam at Haditha. …

Islamic State captured the Anbar towns of Hit and Kubaisa last week, and its fighters are battling Iraqi forces in Abu Ghraib, 18 miles (29 kilometers) from Baghdad’s fortified Green Zone that houses embassies and government offices. The town of Haditha is “completely besieged” by Islamic State militants and will fall within days without U.S. action to prevent it, Faleh al-Issawi, the deputy head of Anbar provincial council, said by phone late yesterday. He said the jihadists control 80 percent of Anbar province.

Joel Wing attributes these advances primarily to the weakness of the Iraqi Security Forces:

The fact that the ISF still appear hapless in most areas does not bode well for the future. They have broken again and again in just a few days. Both Baghdad and the American led coalition need to intervene in a much more determined fashion to reverse the situation, because even if places like Ramadi and Haditha are able to hold on they are cut off from their supply lines and need to be supplied by air something the government forces are not good at. If not there could be more bad news coming out of western Iraq very soon.

In Walter Russell Mead’s view, there is “a lot to be nervous about”:

CBS News cites a figure of 60,000 Iraqi troops assigned to defend Baghdad, but given the rampant corruption in the Iraqi armed forces, the official numbers on paper are one of the least important facts about the defending forces. As Haaretz noted in June, a large portion of the Iraqi army is made up of “ghost soldiers” who appear in the official troop count but pay their commanders a portion of their salary in return for being excused from duty. Graft has always been rampant in the post-Ba’athi Iraqi military, with officers stealing not only money and equipment, but even reportedly food and water from their soldiers during ISIS’ June blitz. These factors, while perhaps attenuated, are still very much at play today. And the chances for turning things around look ever-more remote.

Even if the jihadists can’t take and hold the capital, Paul Shinkman argues that they can still do enough damage to seriously undermine the government’s authority:

Defense officials and analysts agree the Islamic State group likely could not seize and maintain control of Iraq’s capital city. Chiefly, militias within the Shiite Muslim neighborhoods in the east would resist the Sunni extremists’ onslaught and reject their attempts to recruit moderate citizens to their cause. There are, however, measures of extremist success other than all-out capture. It’s no coincidence that the Islamic State group has approached Baghdad from the west, taking control of most of Anbar province, including territory near the capital city that flows into western neighborhoods mostly populated by fellow Sunnis.

Any doubts among locals that their government would not be able to protect them feeds directly into the formula the Islamic State group has used with great success to seize control of large cities like Fallujah in Iraq or parts of towns like Kobani near the Turkish border in Syria. “For them, nothing succeeds like success. They’re on a roll and they’re not really being impeded,” says Bruce Hoffman, a former adviser to coalition forces during the Iraq War and counterterrorism scholar at the CIA. He now teaches at Georgetown University. “At this stage, it’s whoever can provide security.”

But Michael Knights interprets the push toward Baghdad as a Hail Mary pass of sorts:

In truth, the threat posed to Baghdad this autumn is emerging less because ISIL is winning the war in Iraq and more because it might be slowly but steadily losing it. All across north-central Iraq, ISIL is being challenged by joint forces comprised of Sunni tribes, Shia militias, Iraqi soldiers, Iranian advisors and U.S. airpower. ISIL is struggling to maintain its grip on this battlefield of strange bedfellows, and it could be moving on Baghdad now out of a desperate need for a big victory more than anything else. Even as ISIL appears to be making progress in marginal places like Kobane, the Syrian Kurdish border town, inside Iraq the group has been faltering and needs a new front to rejuvenate its campaign.

Among the less-noted victories against ISIL recently: In early October, Kurdish peshmerga forces and local Sunni tribesmen of the Shammar confederation – usually bitter rivals – cooperated in a three-day blitzkrieg that recaptured the vital Rabiya border crossing that links the ISIL territories in Iraq and Syria. In Dhuluiya, 45 miles north of Baghdad, Sunni tribesmen of the Jabouri confederation are pushing ISIL back from their lands in collaboration with both Iraqi Army forces and, stunningly, Iranian-backed Shia militiamen from the Kataib Hezbollah movement.

Don’t get too excited about any victories by the Shia militias, however. Justine Drennan flags an Amnesty International report that accuses these militias of carrying out revenge attacks on Sunni civilians:

The report, released on Tuesday, alleges that since the self-proclaimed Islamic State started grabbing territory in Iraq, Shiite militias supported by the Iraqi government have abducted and shot dozens of Sunni civilians, apparently in retaliation for the Sunni extremist group’s attacks on Shiites. Many of the Sunnis being killed have no apparent connection to the Islamic State, and just seem to have been in the wrong place at the wrong time, the report says.

“Scores of unidentified bodies have been discovered across the country handcuffed and with gunshot wounds to the head, indicating a pattern of deliberate execution-style killings,” the international human rights group stated on Tuesday. The group’s report is based on six weeks of interviews with victims, observers, and government officials in central and northern Iraq between August and September.