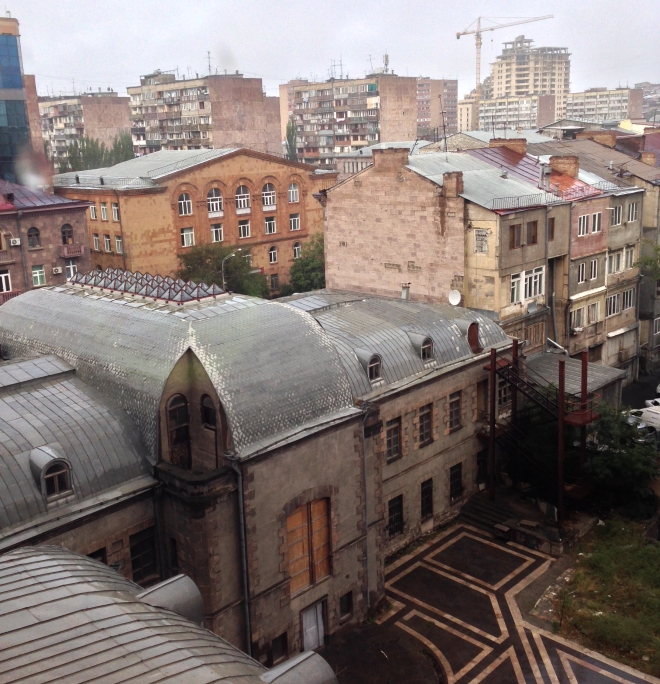 You hear that Dish team? That sharp, repeating sound? That’s the sound of a happy Chini clapping. Nicely, nicely done. No landmarks, no giveaways, no mercy. THIS is how you do a view. Don’t get me wrong, it’s not the hardest contest we’ve had (there’s almost too many clues), but it’s still a classic example of what this little slice of Internet insanity is all about.

Damn. That roof seems like France, but not the rest. Trees seem Italian. Apartments, less European. Who knows? Throwing a stab with Cagliari, Sardinia.

Another describes the scene in greater detail:

European-style architecture from the era of the Industrial Revolution, but a level of run-down shabbiness that you wouldn’t find in western Europe, which says eastern Europe, Russia or former Soviet Republic, or maybe Shanghai. A crane currently building a new high rise maybe argues for the latter.

I’m guessing that one of those cars in the lower right is of former Soviet bloc make, so I’m going to take a random guess of Kiev. I can find quite a few apartment blocks of the appropriate vintage (although nothing that looks in quite such disrepair), but I’ve got nothing to narrow it down to the building under renovation with the Mansard roof and the spiky sky light.

And just as I was about to give up, I noticed the flag on the building across the street. It looks like it’s red, blue and red horizontal stripes. Laos? Doesn’t seem likely to have a city this dense. Nope, I’ll stick to Kiev. Whatever it is, at least it’s an interesting photo.

Another zooms in on the car:

OK, I give up. Based on the metal roofs, snow fences, tall buildings and the Lada in the corner of the picture, I think we’re in Moscow. Since I can’t find the buildings or window, I’ll just send in a Lada joke:

A man buys a Lada but after only one day of ownership returns it to the garage.

Almost every guess this week landed in the former Soviet Union, including cities like Kaliningrad and Tbilisi. This reader returns to the most important clue:

So many clues, but unlike past challenges, this one is just out of reach.  Let’s start with the hint of a red and blue flag at the door of the building in the middle of the photo.  I wasn’t able to get a definitive hit, but the colors are typically Slavic.  (Of course,  it’s hard not to immediately conclude that we’re in Eastern Europe anyway, based on the architecture and apparent lack of recent prosperity.)  Then there’s the indecipherable script on the van to the left.  Even after zooming in I can’t tell if it’s a Latin or Cyrillic script which would have helped enormously.

So my guess is the Northern/Central Balkans.  The consistent  use of metal roofs instead of clay tile pushes us away from the southern Balkan nations, and the shallow slope of the roofs keep us from going too far north and east into snowier climates.  So my guess is Serbia, Romania or Moldova, but I can’t seem to get any more specific than that.  I’ll stick with Serbia based on the Slavic suggestion of the flag.

Identifying that flag led to the bulk of this week’s correct guesses:

You’d think a building with a curvy gambrel roof (or 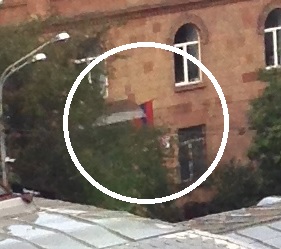 modified mansard?) with pyramid skylights would be easy to find. Maybe, but I sure can’t. Clues were few and far between this week. The vista looked rather post-Soviet: run-down but lots of satellite dishes. Grates on the roof edges suggested someplace snowy. All that added up to any city between Harbin, China and Krakow, Poland. The single real clue I could divine was a flag on the building across the street. It looked red-blue-red to me, which is the flag of Laos, which seemed improbable. But maybe it was red-blue-orange, like the flag of Armenia.

From all the pictures I looked at, it sure did look like Yerevan, Armenia. But I still can’t find that dang building anywhere, and it’s not for lack of trying.

Dish readers have been to Yerevan, naturally:

The moment I saw this week’s VFYW contest picture I knew it was Yerevan, Armenia. I recently had the opportunity to visit that country, and as soon as I scrolled down and saw the photo I had a strong sense of deja vu. What gives it away is the mix of Eurasian, Imperial Russian and Soviet architecture. And the pink/dark stone used for many of the older buildings, which is practically uniquely Armenian (although used to a lesser extent in Azerbaijan and Georgia).

A former winner, who nearly gets the right building, elaborates on why Yerevan is known as “The Pink City”:

Pretty tough; or should I say pretty tuff? You know, there is only one city in the world whose buildings are mainly made of pink tuff [a light, porous rock formed by consolidation of volcanic ash]. This week’s picture was taken in Yerevan, Armenia, from the northwest side of this building on Teryan Street:

There is a hotel housed in the building, the 14th Floor Hotel, but – as its name clearly implies – it is located on the 14th floor, while the contest picture was taken from about the sixth floor, so I am assuming that someone hosted in the hotel sneaked into some other place in the building to shoot the photo.

A contest veteran nails the correct building – another hotel:

Thank God for the half-obscured flag of Armenia by the door of the tan building!  Armenia has the only national flag with that pattern of colors, so we have to be in Yerevan. From there it was a matter of matching the right configuration of Soviet-era housing blocks on Google Earth and finding a photo nearby showing any of the buildings in the foreground of the view.  A photo from Amiryan Street clearly shows the tan building with the obscured flag.  That building is the Yeghishe Charents School No. 67, named for the noted Armenian poet and political prisoner under Stalin:

Details about the rest of the area in the shot, a block away from Yerevan’s Republic Square, were frustratingly few, but there’s enough to go on to deduce that the photo was taken from the Paris Hotel at 4/6 Amiryan Street.

Before focusing on Yerevan, the search began in Vanadzor, Armenia because the Vanadzor State Pedagogical Institute’s building looks similar to the Yeghishe Charents Basic School No. 67 in the center of the contest photo.  (No word yet on whether Armenia will be altering its naming system for elementary schools in light of the basic American meme.)  The detour was nonetheless useful.  The resemblance between the buildings indicated that the window was likely in Armenia.  As for Teryan and Charents, they were Armenian poets of some renowned.

One reader’s struggle after IDing the flag:

“This should be easy!” I thought to myself.

“Only one city of real size … Yerevan.”

“Bingo … all sorts of Soviet era apartment buildings. OK … quite a few. No. An amazing amount of them.”

“Oh crap, I’m going to have to go block by block.”

“Maybe it isn’t Yerevan. But … the flag … an embassy? That new republic of something or other …”

I was just about to go take some ibuprofen and give it another shot in the morning. But then I saw a row of buildings that looked very solid. I went through hundreds of assumptions, and none of them panned out. Eventually, brute force won out.

The very small image of a flag, which is barely visible, was the only clue to quickly identify the country as Armenia. This is a very poor country with wide-spread poverty which the view from the window under-scores.  Quite a contrast with Providence, Rhode Island!

The absence of Google street view for Yerevan makes identifying the precise window or address very challenging.  This montage summarizes my search process:

My first impression of the scene was the juxtaposition of 20th Century shabbiness with some Second Empire / fin de siècle architecture.  I was immediately inclined to think we were looking at a former Soviet or Warsaw Pact city.  But the French feel of the old building in the foreground and the rising terrain in the background left me unable to rule out immediately a Parisian suburb or provincial cité.

The essential clue proved to be the flag on the building in the middle distance – a detail visible only when I enlarged it. (At first I thought the blue stripe appeared between two red ones, which led me astray for a while.)  When I recognized that the bottom stripe was orange, I knew we were in Armenia.  And presumably Yerevan, because I cannot even name another city in Armenia. But the degree of difficulty in pinpointing the window was raised significantly by the fact that Google does not provide Street View for Yerevan.  But at least some Armenians have created a less comprehensive version that allows a few street-level views.

And thus we match the window’s western view … 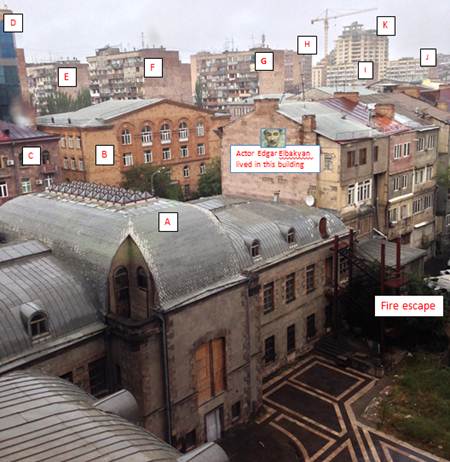 … to landmarks in Yerevan:

Incidentally, a southern view from an upper floor of the same building ought to show Mt. Ararat:

The building in the middle distance (labeled “B”) is the Yeghishe Charents School No. 67.  Here are some other views of it:

So our photographer was looking generally west from this building or set of buildings at the corner of Amiryan and Teryan Streets:

Unfortunately, because “Maps of Yerevan” has fewer still images than Google Street View, one cannot adjust slightly to see around an obstacle to find the window.  And the only street view of the northwest side of the VFYW building is this – in which the photographer’s window, overlooking the fire escape of our fin de siècle building, is obscured: 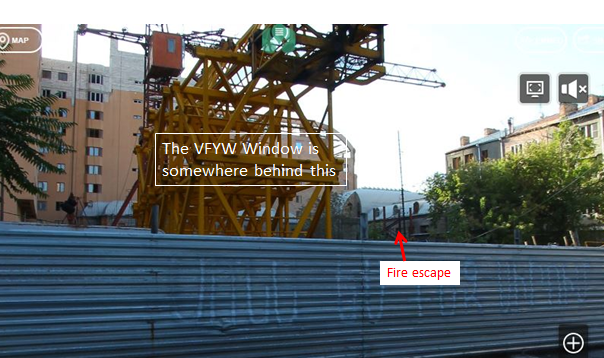 And so I must resort to the most inexact of tools: a Google Earth model image: 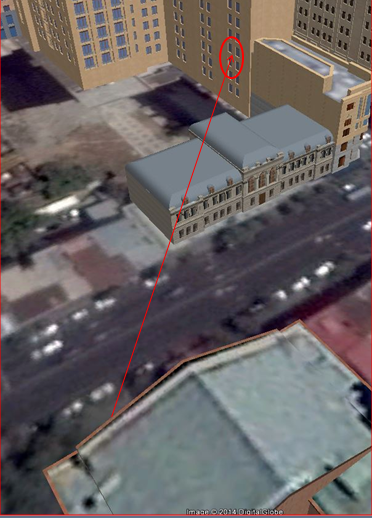 Since the scale is distorted, I find that this is as exact as I can get.  Perhaps this is the view from Deloitte’s Yerevan office on the 3rd floor of 4/6 Amiryan, but it just as likely might be the view from the Regional Studies Center on the 4th floor.

By the way, Yerevan will forever be etched into my mind as the target city for attack in the first computer simulation I ever played (on a Radio Shack TRS-80):  B-1 Nuclear Bomber.

Only one reader nailed the right floor of the building this week, for the win: 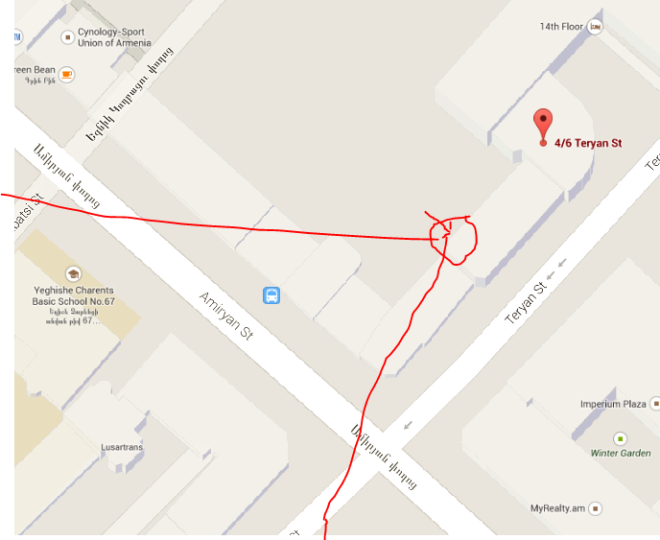 Seems to be looking WSW from 4/6 Teryan St, I’m going to say the 7th floor, let’s say room 715 for kicks. Though I can’t seem to find any additional information or pictures of the building and there’s no street view.

BTW, the street numbering system seems completely arbitrary. Only clue was was the Armenian (yes that’s red, blue, ORANGE, not red, blue, red) flag on the Yeghishe Charents Basic School No. 67 and the shiny roof on the building in the view.

Congrats! From the reader who submitted the photo:

Wow!  This is great! The photo was taken from my 7th floor hotel room at the Paris Hotel in Yerevan.  I was there from Oct. 3-7.

See everyone again on Saturday.