Many states not expanding Medicaid has denied millions of Americans healthcare:

More than three million people, many of them across the South, would now have health insurance through Medicaid, according to an Upshot analysis of data from Enroll America and Civis Analytics. The uninsured rate would be two percentage points lower.

Today, the odds of having health insurance are much lower for people living in Tennessee than in neighboring Kentucky, for example, and lower in Texas than in Arkansas. Sharp differences are seen outside the South, too. Maine, which didn’t expand Medicaid, has many more residents without insurance than neighboring New Hampshire. In a hypothetical world with a different Supreme Court ruling, those differences would be smoothed out. 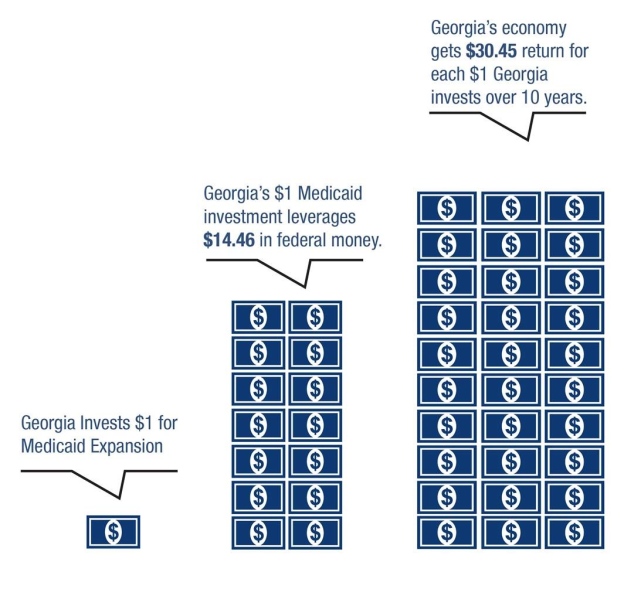 It comes from the Georgia Budget and Policy Institute and looks at the implications of that state’s decision not to expand Medicaid eligibility, as the Affordable Care Act’s architects intended.

Josh Barro and Margot Sanger-Katz calculate that today’s elections “could decide whether as many as 1.3 million more people get health coverage in the years ahead”:

There are 15 governor’s races this year in states that have declined to expand their Medicaid programs as part of the Affordable Care Act. But we count only the five where the election is likely to make a difference. The races we’re watching are genuinely competitive and could result in a policy change if a Republican governor is replaced by a Democrat or an independent. We’re also keeping our eye on a sixth state, Arkansas, which has already expanded its program, but where the legislature has to reauthorize the program every year with a three-quarters majority, leaving the program vulnerable to political shifts.

In addition to the states in which the the governorship could change, here in North Carolina, Republican Governor Pat McCrory said this week that he is “assessing” whether to expand Medicaid here, after signing a bill last year that blocked its expansion with approval of the General Assembly. “Assessing” might sound like weak tea, but it’s actually a sea change given the tenor of the NC GOP these last couple of years. (I’ll leave it to the reader to infer why he’s floated this the week before an election, when it has mostly gone unnoticed in the local news.)