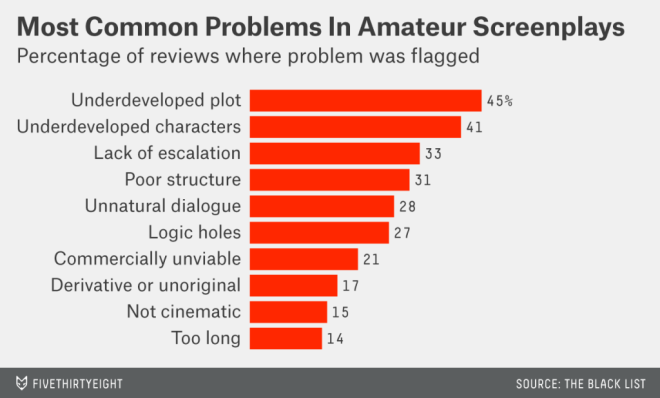 Walt Hickey found a way to quantify the most common problems facing screenwriters:

The Black List offers aspiring screenwriters the chance to have their work evaluated by professional script-readers who work within the industry.1 The readers are drawn from agencies and studios. When scripts are rated highly, the site promotes the screenplays to potential buyers. As a result, The Black List has thousands of script evaluations — grades based on plot, premise, characters, setting and dialogue — from dozens of genres. I asked for a look at those reviews, and they sent over an anonymized record of 4,655 evaluations of 2,784 scripts by 2,221 writers, submitted from March to July of this year. When a script is evaluated, the reader assigns any number of genres to it — from simple drama to prehistoric fantasy — and we can use these to uncover different trends.

First-time writers tend to go one of two ways, said Kate Hagen, a former reader who now oversees the hundred or so readers at The Black List. They write a deeply personal, pseudo-autobiographical screenplay about nothing in particular. “Everybody basically writes that script at first,” Hagen said. “You have to get it out of your system.” Or they swing for the fences and go in the opposite direction, thinking, “I’m going to write a $200 million science fiction movie,” and plan an entire universe and mythology. Those scripts, Hagen said, tend to fail for entirely different reasons.