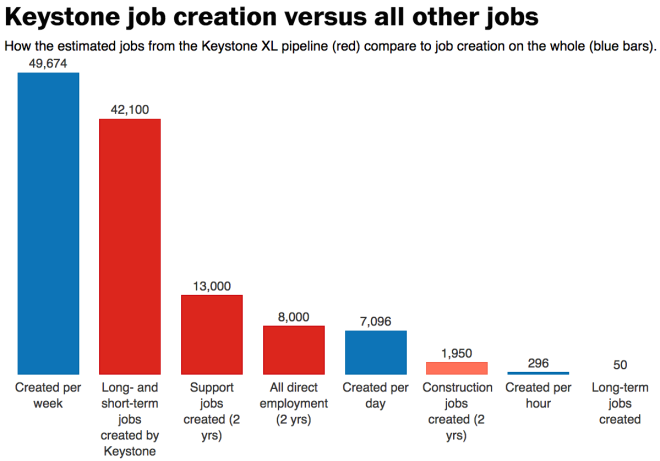 Citing the State Department final environmental impact statement, the lawmakers say the project would create 42,000 jobs. But it takes the economy less than a week to create that many permanent jobs. What’s more, these pipeline jobs wouldn’t be permanent. The State Department report uses the notion of “job years.” So the project, which is expected to take two years to build, requires 3,900 job years for the construction workforce, or 1,950 jobs that last over a two-year period. Another 26,000 jobs (or 13,000 over twoyears) would go to suppliers of goods and services.

Once the project is completed, operations would require 35 permanent employees and 15 temporary contractors, the State Department report says.

Philip Bump illustrates those numbers with the above chart:

For those out of work — a difficult and frustrating experience — the creation of any job that could offer a salary and benefits is worthwhile. The question for lawmakers is how to balance the jobs that would be created by the pipeline — either 42,000 or 50, depending on your feelings about the project — with other considerations, such as the environmental effects of increasing tar sands oil production. If we’re talking about adding the same number of jobs by 2017 that would be added by building a Target, for example, that likely shifts the calculus.

Chait sees the GOP’s Keystone fixation as a way to avoid having a real jobs plan. Which puts Obama in a bad negotiating position:

Republicans need to have a jobs plan. They’re much better off blaming Obama for standing in the way of the huge number of construction jobs that would be made available to hardworking Americans being blocked by the left-wing environmental agenda than they are taking credit for the pipeline. Republicans don’t like cutting deals with Obama even when he offers them something they want. In this case, the trade value of Keystone is negative. Which is to say, Republicans aren’t going to give him squat.