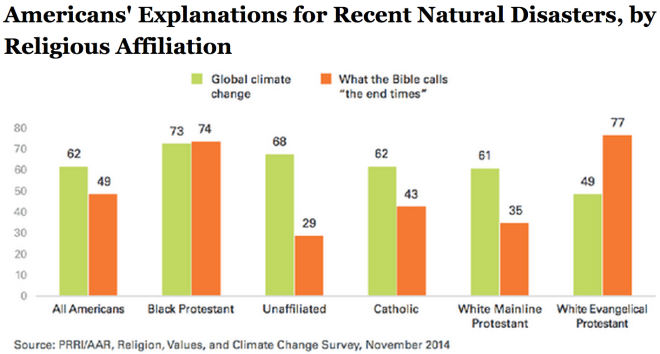 As of 2014, it’s estimated that nearly half of Americans—49 percent—say natural disasters are a sign of “the end times,” as described in the Bible. That’s up from an estimated 44 percent in 2011.

This belief is more prevalent in some religious communities than others. White evangelical Protestants, for example, are more likely than any other group to believe that natural disasters are a sign of the end times, and they’re least likely to assign some of the blame to climate change (participants were allowed to select both options if they wanted). Black Protestants were close behind white evangelicals in terms of apprehending the apocalypse, but they were also the group most likely to believe in climate change, too. Predictably, the religiously unaffiliated were the least likely to believe superstorms are apocalyptic—but even so, a third of that group said they see signs of the end times in the weather.

This fatalistic view of the impacts caused in part by burning fossil fuels could influence the national policy responses to the problem. More than half of the total respondents (53 percent) thought that God would not intercede if humans were destroying the Earth, while 39 percent said that God would step in.

[A]pparently, most of those who believe we’re in the end times also believe God would intervene. Basically at least four in 10 Americans see little reason for a human response — or, at least, doubt things will wind up being catastrophic. It should be no surprise, then, that of all the issues tested by PRRI’s poll, climate change is viewed as the least important. Just 5 percent rate it as the No. 1 issue, behind things like immigration, education and the wealth gap.

Meanwhile, the National Oceanic and Atmospheric Administration reports that last month was the hottest October on record worldwide. Rebecca Leber puts this in perspective:

The last two months of the year would simply have to be an average month in order for 2014 to go on record as the hottest year we’ve experienced yet. As Chris Mooney has written at Wonkblog, we’ve now had 356-straight months of warmer-than-average temperatures (through October). Anyone under 30 years old has never seen a month that was simply average in global temperature compared to the 20th century.

What climate-change deniers confuse is that temperatures in specific parts of the world, like North America, don’t always conform to global trends—which is why scientists look at the bigger picture of temperature records to judge climate trends. Temperatures in North America have been much colder than average, by 1.5 degrees Celsius, this year. This isn’t “proof” that global warming doesn’t exist, and research even links some extreme swings in temperatures, including wintry weather, to climate change.