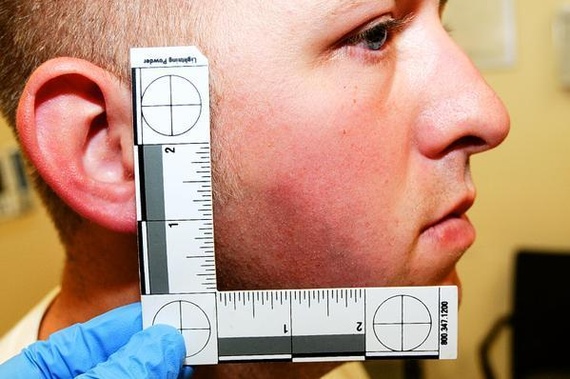 From a writeup of last night’s grand jury decision:

Wilson testified that Brown punched him in the head after the door-slam, causing him to fear for his life. The teen took off after the first two shots but then stopped, the officer said. “His right (hand) goes under his shirt in his waistband and he starts running at me,” Wilson told the jury. “I tell, keep telling him to go to the ground. He doesn’t. I shoot a series of shots. I don’t know how many I shot.” Ten shots were fired from outside of the police car. McCulloch added that Wilson suffered “some swelling and redness to his face” — potential evidence that he was punched. Hospital photos shown to the grand jury depicted a minimally injured Wilson with some discoloration on his right cheek and the back of his neck.

Fraught and loaded with meaning, Darren Wilson told the St. Louis County grand jury that during his scuffle with Michael Brown, the 18 year old Brown looked “angry”, like a “demon.” This is a classic case of a statement that people on both sides will see through profoundly different lights. For Wilson’s supporters, it’s Wilson’s confirmation that Brown was a thug, an out of control violent malefactor. For Brown supporters, there’s little more graphic evidence of the dehumanization that lead to Brown’s killing.

Friedersdorf reads through testimony by Wilson and witnesses. His takeaway:

I haven’t yet had time to go through all the documents released by St. Louis County, but based on these witness statements, I can see why the grand jury would have reason to doubt whether Officer Wilson committed a crime. At least some witnesses corroborate his story. Some that don’t contradict one another. If the witnesses above all testified in a criminal trial, it’s hard to imagine that a jury would fail to have reasonable doubts about what really happened. There are hundreds of pages to sift through that the grand jury saw. In coming days, we’ll probably discover at least some eyewitness testimony contradicted by physical evidence. But it seems all but certain that we’ll never know exactly what happened that day.

Cases like this bring to mind Akira Kurosawa’s Rashomon, the film that famously features the depiction of a violent incident from the perspectives of four witness-participants. The witnesses all contradict each other on various key points, and the audience is left to ponder how difficult it is to discern what really happened in a world full of biased, confused, and, otherwise unreliable storytellers.

Jonathan Ellis provides more highlights from Wilson’s testimony. All the released evidence can be found here.