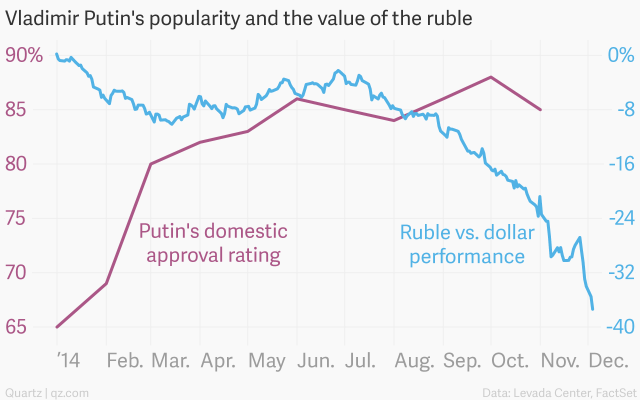 With oil prices on the downslope, Russia’s currency has been losing value for weeks. But yesterday, it suffered its steepest one-day drop in value since the country’s 1998 financial crisis. In most countries, such a precipitous decline would set off alarm bells, but Jason Karaian doubts Putin will do anything about the falling ruble unless or until it starts to cut into his favorables:

Despite the steady economic deterioration—as reflected by the tumbling ruble—Putin’s popularity at home has soared. Granted, the president’s approval rating slipped from 88% in October to 85% last month, but that will hardly ring alarm bells around the Kremlin. Putin says he wants to stay in power for another 10 years, and the recent polls show the he will probably experience little resistance in doing so. A survey yesterday (link in Russian) suggested that he would win more than 80% of the vote if he faced re-election today.

Bershidsky argues that Putin is taking a bigger risk than he thinks:

Putin has explained the government’s strategy this way: The national budget is denominated in rubles, not dollars, and as Russia’s main export, oil, loses dollar value, the currency devaluation offsets the loss. This allows the government to keep its promises for social programs, in nominal terms. As imports drop, the theory goes, domestic producers will pick up the slack, and most Russians aren’t going to feel much of a pinch unless they travel outside the country or buy a lot of imported clothes, electronics and fancy foods. In any case, the people who do such things aren’t Putin’s biggest supporters. He relies on the poorer, older, more nostalgic and less educated electorate, which wouldn’t be hurt by the devaluation.

The problem with these expectations, of course, is that Russia imports a lot of the most basic products. … Even lower middle class Russians will notice when they can no longer afford shoes, cosmetics, medicine or cheap electronics.

Zachary Karabell, on the other hand, sees the falling ruble as giving Putin a chance to double down on his proto-fascist tendencies:

The not-so-veiled chortling in the United States and elsewhere that lower prices will force changes in Russia is, therefore, premature at best. If anything, lower prices could lead to more xenophobia and nationalism, and more Russian aggression over Ukraine and natural gas to Europe as Putin finds other ways to maintain power and prestige at home. It also is leading Russia to attempt to build stronger ties with China, as a way to inoculate itself from vulnerability to Western markets and finance. And Putin surely realizes that commodities are a risky foundation. No one country can control prices and being dependent on commodities means that you are never in control of your own destiny. This recent shock is one more spur for Russia to make more of what it needs itself, if it can.