Adam Kirsch finds it in his Americanness – especially the writer’s conviction that his unhappiness was “a specifically American condition”:

Like many classic American writers but few contemporary ones, he genuinely experienced 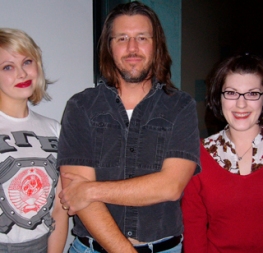 being American as a bitter, significant fate, a problem that the writer had to unravel for the benefit of his fellow sufferers. In a late story, “The Suffering Channel,” Wallace theorizes about “the single great informing conflict of the American psyche,” which is “the conflict between the subjective centrality of our own lives versus our awareness of its objective insignificance.” All of “Infinite Jest” can be seen as a demonstration of the thesis Wallace advances early in the novel: “American experience seems to suggest that people are virtually unlimited in their need to give themselves away, on various levels.”

When Wallace wrote about how difficult it was to be an American, he specifically meant an American of his own generation—the post-sixties cohort known as “Generation X.” “Like most North Americans of his generation,” Wallace writes about the teenage hero of ”Infinite Jest,” “Hal tends to know way less about why he feels certain ways about the objects and pursuits he’s devoted to than he does about the objects and pursuits themselves.” Likewise, in “Westward,” he writes, “Like many Americans of his generation in this awkwardest of post-Imperial decades . . . Sternberg is deeply ambivalent about being embodied.” It is no wonder that readers born between 1965 and 1980 responded to this kind of solicitude, with its implication that they were unique, and uniquely burdened.

(Photo via Wiki: “David Foster Wallace at the Hammer Museum in Los Angeles, standing for a photo with fans Claudia Sherman and Amanda Barnes, in January 2006.”)