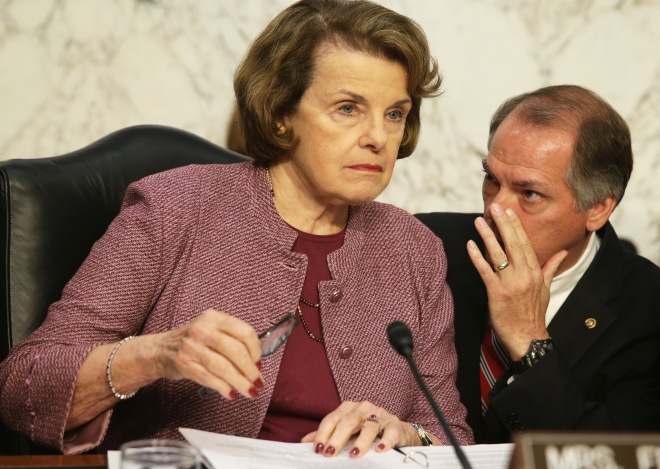 This past week has been Dianne Feinstein’s finest hour. In fact, it has been the Senate’s finest hour – with the remarkable speeches of Senator Udall and Senator McCain as well. The torture apologists often try to dismiss the report as some kind of partisan hatchet-job. But they never grapple with Feinstein’s long record of support for the CIA, and the respect she commands among her fellow Senators. Nor do they confront the unique personal perspective of John McCain, the Republican’s candidate for president only six years ago. A reader in California praises her senior Senator:

DiFi has a core of steel. Thanks so much for posting her tweet stream. She may be far – far! – from perfect to this liberal’s eyes, but she’s tough and she’s seen shit and I think she’s done putting up with it. I’m sure you’ve seen the footage of a young Dianne Feinstein, hours after having found Harvey Milk’s body, announcing his and Mayor Moscone’s death to the press. I first saw it in The Times of Harvey Milk before I lived in California, and I thought of it (as she must have) when she was the first person out to the microphones at Obama’s first inauguration. (And of course in old Washington style, she was the one who hosted the private dinner where Barack and Hillary worked it out.)

I don’t think the CIA would be wise to mess with her at this point in her life and legacy.

With any luck, they’ve learned their lesson.

(Photo: Committee chairman Senator Dianne Feinstein (D-CA) listens to an aide during a hearing before the Senate (Select) Intelligence Committee on June 5, 2014. By Alex Wong/Getty Images)