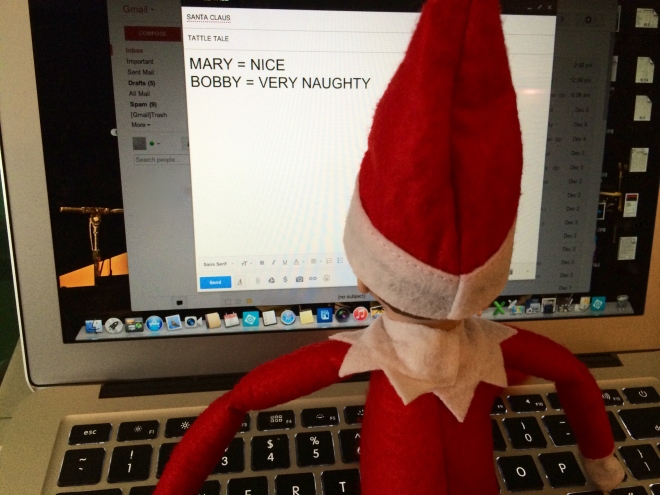 I didn’t know what Elf on a Shelf was until maybe last week, and when I found out, I didn’t like it one bit. The little guy’s a spy! A spy! A gentle playtime introduction to the idea of a pervasive but ultimately benevolent surveillance state. No good! Bad for the children!

It is a comfort to discover, from Peter Holley’s charming Washington Post piece, that I am not alone in this response:

For some, the Elf on the Shelf doll, with its doe-eyed gaze and cherubic face, has become a whimsical holiday tradition — one that helpfully reminds children to stay out of trouble in the lead-up to Christmas.

For others — like, say, digital technology professor Laura Pinto — the Elf on the Shelf is “a capillary form of power that normalizes the voluntary surrender of privacy, teaching young people to blindly accept panoptic surveillance and” [deep breath] “reify hegemonic power.”

The latter perspective is detailed in “Who’s the Boss,” a paper published by the Canadian Centre for Policy Alternatives, in which Pinto and co-author Selena Nemorin argue that the popular seasonal doll is preparing a generation of children to uncritically accept “increasingly intrusive (albeit whimsically packaged) modes of surveillance.”

Exactly. You might not cotton to Pinto’s academic argot, but she’s got the right idea. If you didn’t know, the way the Elf on the Shelf works, according to the massively popular accompanying story book, is that this creepy elf is Santa’s intelligence agent lurking in your house, keeping tabs on whether the kids are naughty or nice and reporting back to the jolly old goat. The kids aren’t supposed to touch the elf, a misdeed that might disqualify them from getting presents from Santa. And parents jerk the kids around by moving the elf from room to room so that the kids can’t ever be sure where it is.

In Pinto’s paper with Selena Nemorin, they write:

What is troubling is what The Elf on the Shelf represents and normalizes: anecdotal evidence reveals that children perform an identity that is not only for caretakers, but for an external authority (The Elf on the Shelf), similar to the dynamic between citizen and authority in the context of the surveillance state.

I suppose most people will think this sounds nutty. Well, you know what I think is nutty? I’ve got an infant son, and it’s damned hard to find clothes that don’t have sports balls or modes of transportation on them, and impossible to find anything intended for a boy in pink. People (and the market that caters to their preferences) seem weirdly dogged about making damn sure that their babies’ outward appearance strictly conforms to our most debased and simplified gender stereotypes. I mean, people need to know what sex your baby is so they know how to treat it, right? To know whether to buy it a tiara or a truck? To know say whether to say the tot is “pretty” or a “li’l scamp.” Who knows what confusion might ensue if the my wee tiny baby boy appears in public wearing a pink hat, or is not exposed very early to objects and clothing emblazoned with pro-sports propaganda! If it’s just normal to worry about that sort of thing, then I would submit that, logically speaking, it ought not to seem so nutty to worry that Elf on a Shelf might be preparing your child to complacently accept surveillance from an unaccountable authoritarian state.

When Felix is old enough, we’ll get ourselves an Elf on the Shelf, and I’ll tell him no presents will come until he finds the little rat and burns him alive. (This plan might need some work.)

Anyway, this video is great: