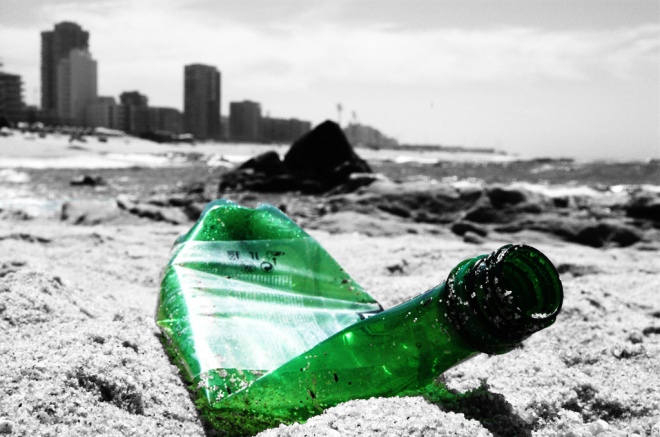 With a global population of about 7.2 billion, that’s nearly 700 pieces per person.

The study, published in the journal PLOS One by Marcus Eriksen of the Five Gyres Institute in Los Angeles and a large group of colleagues, is based on data from 24 separate ocean expeditions, conducted between 2007 and 2013, to sample plastic pollution. Plastic was either observed from boats, or hauled up from the ocean by nets, in 1,571 locations. The data were then used to run an ocean model to simulate the amount and distribution of plastic debris.

The result not only yielded the estimate of over 5 trillion pieces of plastic in the global ocean — it also cast light on how plastic changes within the ocean (breaking down into smaller pieces) and circulates around the globe. Pieces between 1 millimeter and 4.75 millimeters in size were by far the most prevalent class of plastic in the ocean. However, by weight, really large pieces of plastic, greater than 200 millimeters in size, were the most significant.

Katy Steinmetz touches on efforts to rein in microbeads – the tiny bits of plastic found in exfoliating body washes and face scrubs – which contribute significantly to this problem:

These little orbs, introduced to replace harsher exfoliants like pumice, are so small that after they’re washed down the sink or tub, they sneak through sifters at water treatment plants and end up in the ocean and other bodies of water. Once in the ocean, researchers have found, these plastics act like sponges for toxins, and can be accidentally ingested by fish, thus ending up in the food chain. Several states considered bills to ban microbeads last session, but only Illinois passed a law, becoming the first state to do so. Now lawmakers in at least three states are gearing up for another go in 2015.

“We were outgunned,” says Stiv Wilson, associate director at 5 Gyres, a non-profit dedicated to fighting plastic pollution. In California, the industry group Personal Care Products Council—which represents companies like Johnson & Johnson and Clinique—lobbied members to oppose a bill that would have banned the use of microbeads, saying it was “overly aggressive and unrealistic.” The bill failed by one vote. The same state assemblyman who proposed that bill, Richard Bloom, plans to try again, with what Wilson says will be a “much broader coalition” of supporters.

Previous Dish on microbeads here and plastic more generally in the oceans here.