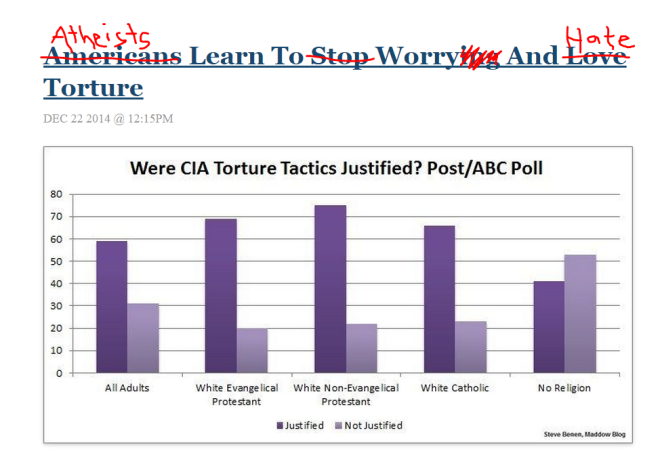 Many atheists are surely passing around this post. One writes:

Dear Andrew (welcome back!), Chris et al: What jumped out at me in the chart accompanying your post is that the ONLY group of Americans in which a majority do not consider US torture justified is people with no religion. Hmmm. I thought that there was no morality without religion?

American religion is in pretty bad shape – or its leaders are terrible communicators, or it’s been totally hijacked by the RWNJ media – when Godless atheists exhibit more traditional morality than either Protestants or Catholics.  That 40% of atheists approve of torture is appalling to this atheist, but I’ll take it over the huge majorities of “believers.”

Another non-believer sends the above graphic. Another piles on:

I’m proud of my group (non-religious people)’s views on torture being the most enlightened. It’s a big reason why I ran from Christianity.

I wholeheartedly agree that most American Christians are not Christians in the slightest. It’s another reason I despise most American Christians – they claim to be inherently better than everyone else, especially Atheists and Agnostics – yet are obviously not. They support our modern Rome blindly; they put money ahead of everything; they support torture; they support persecution of minorities; they believe that supporting war is Christian; they don’t know their holy texts as well as Atheists and Agnostics do; etc.

Another is more nuanced:

Can we finally put an end to the notion that humans need God or religion in order to be moral? There is perhaps no act more morally corrupt than torture, but we find that the only religious group to disapprove of torture was: the non-religious. Protestants and Catholics considered torture justified by a margin of more than three to one. If the numbers were reversed, we would hear no end that this proves that without religion, you can’t have a true moral compass.

I won’t make the opposite claim – that religion is morally corrupting – because I think the actual relationship between religiosity and morality is essentially nil.

I appreciate your writing in part because you are unapologetically devout and at the same time profoundly respectful of non-believers. I would like to see more atheists extend the same respect toward the believers. Yet I still get the sense at times that you and other believers can’t quite grasp how an atheist‘s morality can be quite as good as yours. And so you resort to writing, “the staggering levels of support for torture by Christians merely reveals that very few of them are Christians at all.” Poppycock. They are Christians who have given in to fear and/or rage – something to which all of us, whether Christian, Hindu, Muslim or atheist are vulnerable.

So I repeat: Enough of the notion that without God or religion we can’t be truly moral. Letting go of that belief will take us another step toward truly religiously tolerant society where men and women are judged by their actions, not by their religious garb.

I sent your recent post on torture to my dad, who is a professor at a theological seminary in the U.S. My dad and I don’t usually see eye-to-eye on political or religious issues (me being a socialist atheist, him being a conservative evangelical), but our beliefs converge when it comes to torture. He responded to my e-mail with the following:

Thanks for this. I’m going to print off a copy and include a new topic on “torture” in my Old Testament Biblical Theology class notes on “Torah and Ethics.” It will also fit under my lectures on “image of God,” which are in two classes.

Last but not least, a dissent from a theology professor:

The US Catholic bishops have made plenty of mistakes, but overlooking torture is not one of them, as you claim in your post.  They did “stand up and be counted” on this issue, starting in 2005 right up to the present. Here‘s the resource page. And here is the 2008 study guide “Torture is a Moral Issue”.

Now, could they have done more?  Sure.  But you have to admit that the Catholics in the pews don’t respond very well to the top-down moral preaching that the bishops advise already.  The support of Catholics for torture thus indicates the complete assimilation of white Catholics to the general American population, not some lack of advocacy on the part of priests and bishops.

I’m aware of their efforts and indeed of the National Religious Campaign Against Torture. I’m a big admirer of their work. But it remains true that on such a profound issue, it’s scandalous that Catholics of all people can defend the torture of human beings. I don’t think the hierarchy have broken through the general noise. And I have never heard a word about it from the pulpit in the last ten years. Maybe Francis will come through.