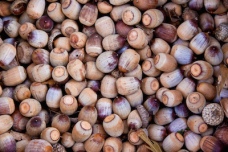 example of the collective wit of our readership. A reminder of what an eggcorn is: “a word or phrase that results from a mishearing or misinterpretation of another, an element of the original being substituted for one that sounds very similar or identical.” The thread started when the Guardian called me out for using “leash on life” back in 2007. The resulting avalanche of eggcorns from readers is here. Below are many more new examples:

Don’t know if this is an eggcorn or malaprop, but a student in a quiz just referred to the apostle Paul doing something “by the seed of his pants”.

I saw this phrase in a user email from Bill Simmons’ NFL Week 15 mail bag. A question from a Cleveland Browns fan used this hilarious eggcorn, which I’ve never before seen. I didn’t even finish the paragraph before rushing off to email The Dish. Here’s an excerpt of his email with the gem of a phrase in context (italics mine):

The Browns will win just enough games next season to regress back to their yearly average of five wins, and Jimmy Haslem, tired of scamming truckers and cross-country-vacationers and other middle class pee-ons, will throw a temper tantrum, clean house, and repeat this miserable cycle until the team moves to LA and wins a Super Bowl.

Until very recently I thought that a Hobson’s Choice (a choice where there is not choice at all “take it or leave it”) was actually a “hostage choice.” Personally I think my version is far more descriptive.

One of my friends, describing an interaction with his ex-wife:  “… and then she went bombastic on me.”

My friend and his son see a dead bird, and his son asks him if birds can get to heaven, since they don’t have any skin. My friend says, “First of all, they do have skin – underneath their feathers – and second, what does that have to do with heaven?”  Son: “because when you get to heaven, Jesus takes all of your skins!” This is an atheist family – he has no idea how his son learned about Hannibal Lecter Jesus.

Courtesy of Scott Walker: “Molotov” in lieu of “Mazel Tov”.  It seems that he may be taking the idea of the stern, vengeful diety of the Old Testament a bit too far.