The uninsured rate keeps ticking down: 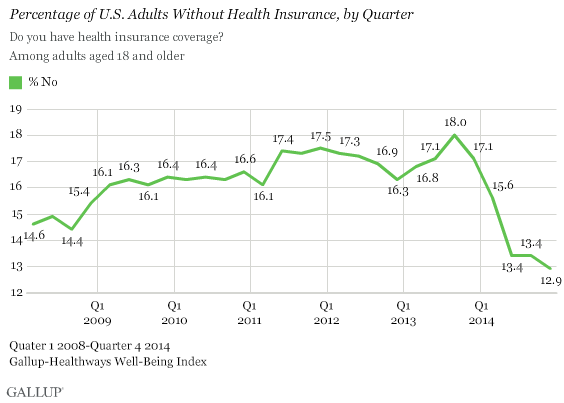 There are lots of ways to judge Obamacare is working: whether its helping lower health care costs, if its improving our access to doctors, and (perhaps the holy grail) if its making Americans health care. (The New York Times has an excellent package working through many of these issues). This graph shows that Obamacare is accomplishing at least one of its main goals: expanding health insurance coverage to millions of Americans.

The uninsurance rate has dropped the most among blacks, Hispanics, the young, and the poor. It’s dropped by only a small amount among the middle classes, since they’re mostly insured already by their employers. But even right smack in the middle, uninsurance rates have dropped by three percentage points. Obamacare just keeps on working, and it’s working for everyone.

Sargent notes that “the uninsured rate has fallen by 6.9 percentage points among those making less than $36,000″:

McConnell and other leaders of the incoming GOP Senate majority are openly looking to the Supreme Court to gut Obamacare subsidies as a means to accomplish what Republicans failed to do legislatively and politically.

Whether or not you think the consequences of a SCOTUS decision against the law should weigh on the Justices, the declining insurance rate — among lower income Americans in particular — should theoretically increase pressure on Republicans to think about how they will respond if such a decision does come down (such as a fix or an alternative). Indeed, even some diehard opponents of the law, and someGOP Senators, agree with this. Of course, it’s an open question as to whether this will actually happen in any meaningful sense: One alternative possibility is that Republicans will float the general idea that they’re interested in a fix solely in order to make the consequences of a SCOTUS decision against the law appear less dire.