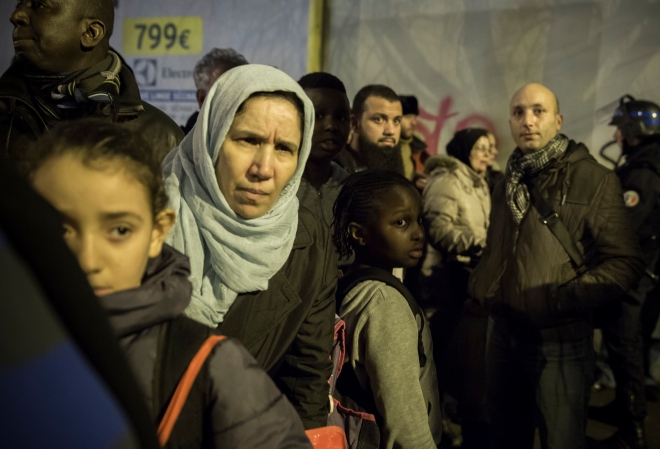 Residents return to their homes following the hostage situation at a kosher deli in Port de Vincennes in Paris, France on January 9, 2015. By Dan Kitwood/Getty Images. From a summary of today’s events on the Guardian live-blog:

• Two separate police raids in Paris and Dammartin-en-Goële killed the Charlie Hebdo gunmen and a third man, ending a three-day manhunt. Police found Chérif and Saïd Kouachi, wanted for murdering 12 people in Paris on Wednesday, and cornered them in a printworks office. … One hostage escaped unharmed in Dammartin-en-Goële.

• Four hostages were killed and four wounded in the supermarket in Paris, where Amedy Coulibaly held civilians captive. Authorities believe Coulibaly and an accomplice killed a policewoman Thursday in southern France, naming her as Hayat Boumeddienne, and described her as “armed and dangerous” and at large.

• In an interview before he was killed, Cherif Kouachi claimed that he was sent by al-Qaida in Yemen, as a defender of the prophet. In a separate interview, Coulibaly said that his attack had been ‘synchronized’ with the Kouachis’ Charlie Hebdo attack.