And so we get a little warmer:

Central Intelligence Agency Director John Brennan consulted the White House before directing agency personnel to sift through a walled-off computer drive being used by the Senate Intelligence Committee to construct its investigation of the agency’s torture program, according to a recently released report by the CIA’s Office of the Inspector General. The Inspector General’s report, which was completed in July but only released by the agency on Wednesday, reveals that Brennan spoke with White House chief of staff Denis McDonough before ordering CIA employees to “use whatever means necessary” to determine how certain sensitive internal documents had wound up in Senate investigators’ hands.

So at the very least, the White House was aware of the CIA’s intent to spy on the Senate staffers, as part, one can only presume, of its campaign to shield the CIA from any accountability on torture and to undermine as much as possible the SSCI report. Then we have this blather from Josh Earnest today:

Reporter: Was it acceptable for the CIA to go into these computers and look at what, you know, at what the senate committee was doing? Senator Feinstein was very, very upset about this. Does the White House have a position about whether the CIA acted properly or not?

Josh Earnest: What is most important is we have a group of individuals within area of expertise who can sit down and take an impartial look at all the facts and determine exactly what happened to offer up some prescriptions for what can be changed to ensure that any sort of miscommunication or anything that would interfere with the ability of congress to conduct proper oversight of the CIA is avoided in the future. You can read the report. It’s been declassified and released. And they included a set of procedural reforms they believe will be helpful in avoiding any of these disagreements in the future. Fortunately, the director of the CIA said he’d implement these reforms. What’s most important is that there’s an effective relationship between the intelligence agencies and the committees that oversee them.

My favorite line in that pabulum is: “Fortunately, the director of the CIA said he’d implement these reforms.” Fortunately. It’s not as if the president could simply order him to do so. He must ask very, very politely; and if he’s very, very lucky, the CIA Director may occasionally agree.

Some posts today worth revisiting: why women cry more than men; watching Charlie self-censorship in Britain on live TV; the burgeoning Republican consensus that 11 million people need to be forcibly deported from the US; the miracle of the latest Google Translate app; and how Obama’s Gallup approval ratings at this point in his second term are identical to Reagan’s.

The most popular post of the day was Charlie, Blasphemer; followed by Quotes For The Day.

We’ve updated many recent posts with your emails – read them all here. You can always leave your unfiltered comments at our Facebook page and @dishfeed. 19 more readers became subscribers today. You can join them here – and get access to all the readons and Deep Dish – for a little as $1.99 month. Gift subscriptions are available here. Dish t-shirts are for sale here and our coffee mugs here. One happy recipient from the holidays:

A few weeks ago I wrote and said “fuggedaboudit!” because of the shipping and handling cost of the 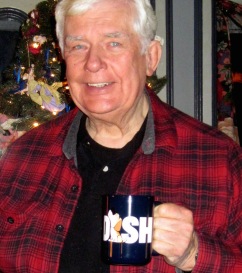 Dish mug and I said I wouldn’t buy one.

On Christmas Day I was shocked, I tell you, shocked! When I opened a present from my thoughtful wife there was a Dish mug! She took it into her own hands to send for it and I am so tickled and happy to get it! They are great and it hasn’t left my hand since I took it out of the box. All Christmas Day it was filled with coffee, tea, eggnog, or wassail punch.

They are superb, and I say to everybody: just do it and GET ONE!

You can do so here – but soon, since there are only a small number of mugs remaining from our limited run (we opted for the higher-quality mugs over the print-on-demand ones).