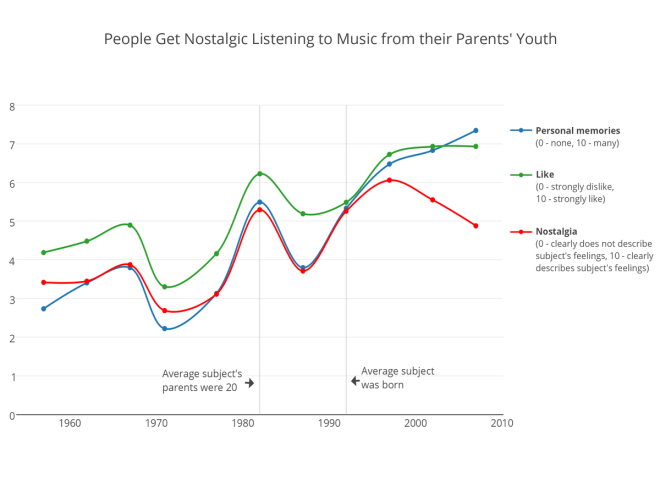 Rosie Cima examines research on how “people are disproportionately attached to songs that were on the radio when they were young”:

For better or for worse, this preference seems to override things like the critical quality of the music — people just plain like music more if it was popular when they were young, regardless of whether or not that music was terrible. But an even stranger thing about all this is that these preferences appear to be inheritable. In 2012, researchers from Cornell University and UC Santa Cruz exposed a bunch of college-aged subjects to clips of Billboard top singles dating back to 1955. Then, they surveyed the subjects’ responses.

The researchers’ found that, in addition to liking  music from their own generation, “subjects also displayed a similar attachment – including a feeling of nostalgia — to music that was popular in the early 1980s, long before they were born“:

“According to previous research, this would be the time when [the subject’s] parents’ preferences were established,” the researchers write. Their theory is that because of this attachment, parents listened to this music during their “child rearing years” contributing to their children’s musical education.

And there’s another bump in attachment, preference, and nostalgia for music that was popular in the 1960s. Although researchers mention that this music might just be higher-quality and thus have stayed in the popular listening repertoire longer (earning the label “classic rock”), they also say this bump could be the product of grandparents’ influence, either directly or through the parents, on the subjects’ listening habits and music-associated memories.

What the research also means, on a more collective level, is that there is a psychological reason that “Hey Ya” will inevitably be bringing people to the dance floors of the weddings of 2040—and that only part of that reason can be attributed to humanity’s ongoing desire to shake it like a Polaroid picture. Just as nostalgia tends to confer more nostalgia, popularity also tends to build on itself: Once a song makes it to the top of the charts, the memories people associate with it help to keep it in our cultural consciousness.