At least compared to the other classes: 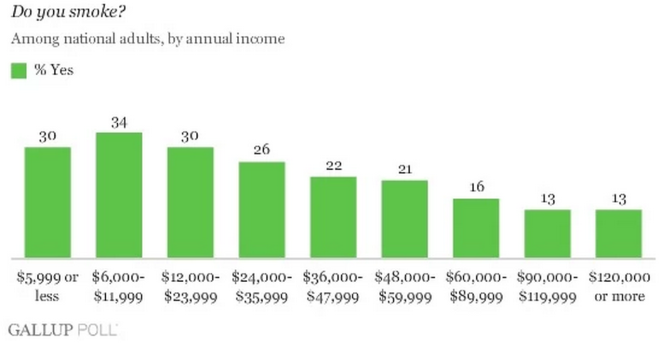 In the era portrayed in Mad Men, smoking was a normative behavior that was not associated with poverty. Indeed, because they had less money and were more religious, the poor if anything were somewhat less likely to smoke than middle-class people. But once the health risks of smoking became widely-known, the better-off began kicking the habit: high-income families decreased their smoking by 62 percent from 1965 to 1999, versus only 9 percent for low-income families. Smoking became analogous to a bad neighborhood that kept getting worse because everyone who had the resources to move out did so, leaving a progressively beaten down group behind.

He contends that “poorer smokers simply have a hard time quitting”:

Although lower income people’s access to health care is being improved by the Affordable Care Act, they are still likely to lag middle class people in their access to effective smoking cessation treatments.  They also may face challenges in accessing care for co-occurring mental health problems (e.g., depression) which make quitting smoking more difficult.