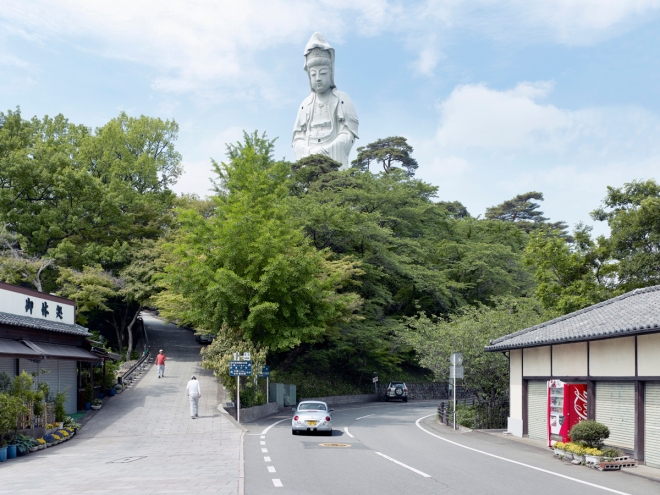 For his series Colloses, Fabrice Fouillet photographed some of the world’s most massive statues:

“I was first intrigued by the human need or desire to built gigantic declarations,” said Fouillet. “I was not especially looking for the ‘spectacular’ in the series—even if the dimensions of the statues are—but I wanted to explore how such huge monuments fit in the landscape despite their traditional social, political, or religious functions.”

Fouillet frames these sites from the sidelines, capturing the perspective you don’t see in postcards. He frames Dai Kanon in Sendai, Japan, from a few blocks away, for example. Christ the King in Świebodzin, Poland, is framed from behind. In some cases, he shoots wide enough to include mundane details of life and the people living in the shadow of these looming monoliths. Laundry flaps in the breeze beneath the imposing facade of Ataturk Mask in Izmir, Turkey, and a Coca-Cola machine sits just down the hill from Grand Byakue Kannon in Takazaki, Japan. Fouillet appears to be toying with our notions of the sacred and profane.

“It was important to me to extract the monument from its formal touristic and religious surroundings,” said Fouillet. “It is not about a description of monumental symbol but more to observe how and where it takes places.”