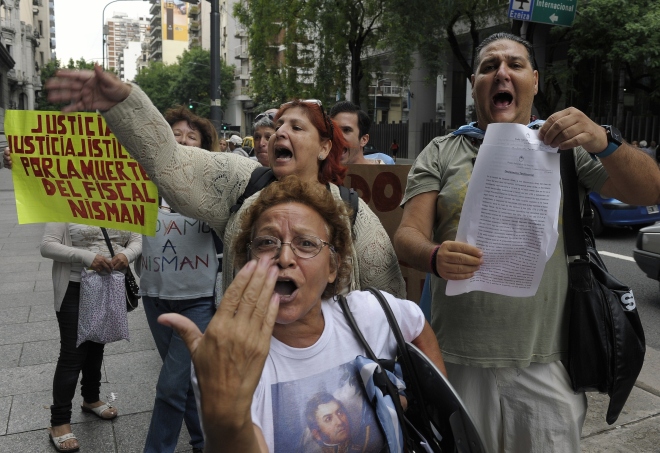 People demonstrate in front of the National Congress in Buenos Aires against the death of Argentine public prosecutor Alberto Nisman, who was found shot dead this weekend, just days after accusing President Cristina Kirchner of obstructing a probe into a 1994 Jewish center bombing. Nisman, 51, who was just hours away from testifying at a congressional hearing, was found dead overnight on Sunday in his apartment in the trendy Puerto Madero neighbourhood. “I can confirm that a .22-caliber handgun was found beside the body,” prosecutor Viviana Fein said. The nation’s top security official said Nisman appears to have committed suicide. By Alejandro Pagni/AFP/Getty Images. The latest:

Confronted with a deepening scandal, the president of Argentina abruptly reversed herself on Thursday, saying that the death of the lead prosecutor investigating the 1994 bombing of a Jewish center was not a suicide as she and other government officials had suggested. The president, Cristina Fernández de Kirchner, instead suggested that the prosecutor’s death was part of what she hinted was a sinister plot to defame and destroy her. … Mrs. Kirchner has not appeared in public since Mr. Nisman’s death, and her vice-president has been visiting Bolivia. She posted a link to her latest remarks on Twitter. When she first wrote about Mr. Nisman on Tuesday, it was on her Facebook page, leading Mr. de Narváez to call her leadership “adolescent.”