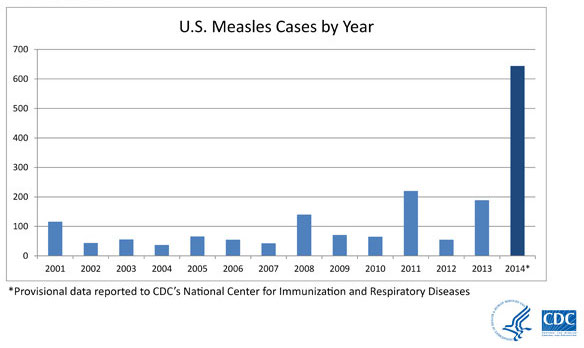 A spokesman for the California state health department has told Reuters that he believes “unvaccinated individuals have been the principal factor” in a mid-December measles outbreak at Disneyland that has infected more than 70 people in six western states and Mexico, including five Disney employees.

Sarah Kliff spells out how more individuals getting vaccinated could have protected the six infants who got sick:

The measles vaccine is not licensed for use on babies younger than 12 months. That means that, for the first year of life, babies depend on the fact that everybody else around them gets vaccinated. This essentially creates a firewall: if other people are vaccinated, they won’t catch the disease — and won’t spread it to young children who cannot get protection.

This is what scientists call “herd immunity,” and its a huge reason we get vaccines in the first place. The shots aren’t just about protecting ourselves from measles, mumps, the flu, or other diseases. They’re about making it really hard for those who are medically frail (like the elderly) and those who can’t get the vaccine (often babies and pregnant women) to catch a disease that could be devastating to them.

The measles vaccine is actually one of the most effective vaccines in the world. According to Greg Wallace, lead of the measles, mumps, rubella and polio team at the CDC, two doses are 97 percent effective against infection. (Compare that to 88 percent for two doses of the mumps vaccine from the MMR shot.) It’s a live version of the virus, just weakened—or attenuated—so it doesn’t cause severe symptoms. The vaccine replicates just like the full-on measles virus, inciting your immune system to produce antibodies against it. Those antibodies then protect against actual measles as well.

But in some people, that response just doesn’t happen. No one knows why. Either your body doesn’t produce enough antibodies, or the ones it does produce aren’t specific enough to latch on to the virus and kill it.

Phillips v. City of New York (2d Cir. Jan. 7, 2015) reaffirms that the government may mandate vaccinations. It may mandate vaccinations for everyone, and it can certainly mandate them for everyone who goes to public school. Seems quite right to me; there may indeed be a presumptive constitutional right to be free from unwanted medical treatment, but such a right can be trumped by the very strong public interest in preventing people from becoming unwitting carriers of deadly illness. … Such statutes often do allow religious exemptions, but that’s not a matter of constitutional obligation. In Phillips, the one of the plaintiffs did try to claim the exemption, but the trial court found that her “objections to vaccinations were not based on religious beliefs,” and the plaintiff didn’t appeal that finding.

Genna Buck looks at where our vaccination rates need to be:

In California’s Santa Monica-Malibu school district, 11.5 per cent of parents refuse to vaccinate their kids. In nearby Orange County, the figure is 8.6 per cent. In Beverly Hills it’s five per cent—almost, but not quite, a safe level of vaccine coverage. In a large study that observed measles infections in the Netherlands over decades, scientists calculated that 95.7 per cent of a population needs to be immune to measles to prevent regular outbreaks. And since no vaccine is perfectly effective, even more than that number need to be vaccinated to protect the whole community.

Tara C. Smith notes that MMR vaccination is “at or close to 90 percent by age 3 and about 95 percent by kindergarten”:

However, national statistics obscure local trends. Those 5 percent who are unvaccinated aren’t randomly distributed throughout the country. Instead, they tend to cluster in location, with many unvaccinated children living in close proximity to others, creating anti-vaccine communities with high susceptibility to measles and other vaccine-preventable diseases.

Why this is so dangerous:

What many forget is that we had a massive outbreak of measles in the United States from 1989–1991. While our 644 cases in 2014 seems high compared with recent years, 25 years ago measles incidence spiked to 18,000 cases per year, with a total of more than 55,000 infections before the outbreak began to dwindle. It was the largest measles outbreak in this country since the 1970s. … Despite our advances and our modernity and our status as a developed country, we still saw 123 measles deaths during this epidemic—here, in the United States, where we get plenty of Vitamin A. There were also 11,000 hospitalizations—fully one-fifth of people infected with measles became sick enough to be hospitalized.

(Chart from the CDC)