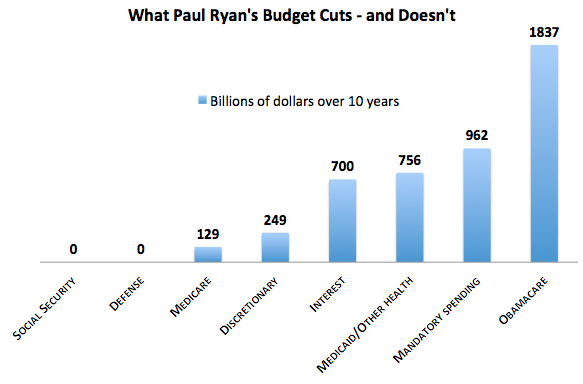 Derek Thompson looks at what the Ryan budget does and doesn’t cut:

[T]his budget is as notable for what it cuts as for what it doesn’t cut. Social Security, defense, and Medicare — together making up about half of the federal budget — would scarcely be cut at all. After all, it’s hard to win a Republican election if you abandon old voters and the defense industry. As for health care and cash support for the poor? That’s where the hammer hits.

The report’s distinct treatment of defense and non-defense spending is actually a great window into Ryan’s fundamental philosophy. The section on defense spending has long passages about the importance of national security and the dangers of intemperate cuts. Rooting out waste is important, the document says, but it must be done carefully. The section on the social safety net has virtually no similar language. A reader unfamiliar with the reality of American life would have no idea that millions of Americans live in poverty—that they struggle, every day, to pay for bare necessities like gas, rent, and food. Of course, if “The Path to Prosperity” mentioned those things, readers might want to know what Ryan proposed to do about them. But Ryan doesn’t propose meaningful substitutes for the support he’d take away. Instead, he puts his faith in the strength of individuals and communities to help those who struggle.

The absence of defense cuts reveals that this is not about fiscal conservatism; it’s about a society that celebrates soaring inequality while attempting to remain the sole global hegemon. It’s almost a parody of a document of how a democracy perishes – because its social contract ends with two utterly separate nations of “hyper-rich” and “always-struggling”, it delegitimizes capitalism by rewarding and even celebrating its abusers, and because its premature austerity could well increase the long-term debt, rather than lower it.