Reviewing Harold Holzer’s Lincoln and the Power of the Press: The War for Public Opinion, Garry Wills marvels at how the president deftly handled newspaper editors and reporters, noting that journalism in his day “was a dirty game by later standards, and no one played it better than Abraham Lincoln”:

As soon as Lincoln was elected he set about new dealings with the press. His inaugural 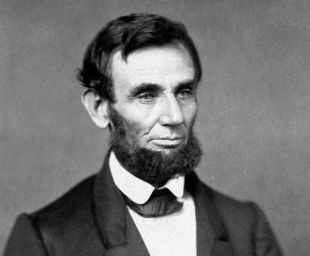 address was secretly set in type by the editor of the Illinois State Journal, which had the sole firsthand report of his remarks at the train station as he left for Washington. Armed with the presidency, Lincoln famously tried to appoint cabinet members and military officers of as wide political variety as would cooperate with him. Holzer shows us something further—that he used patronage to recruit the loyalties of newspaper owners, editors, and reporters on a grand scale. Newspapering became the preferred path to becoming ambassador, port inspector, revenue collector, postmaster, and White House staffer—dozens and dozens of the ink-stained were brought in to save the Union.

Lincoln even kept wooing the stubbornly negrophobe editor James Gordon Bennett, of the New York Herald, making his son a navy lieutenant (how could the father not support a war his favored son was fighting in?). Lincoln helped a favored editor, John Wein Forney, move from the Philadelphia Press to set up the Sunday Morning Chronicle in Washington by securing for him the remunerative post of secretary of the Senate and giving the new paper government advertising accounts.

Myron Magnet riffs on a different display of Lincoln’s communication skills, his Second Inaugural. He notes the speech is given a close reading in Richard Brookhiser’s new book on Lincoln, Founders’ Son:

Brookhiser properly devotes an entire chapter to Lincoln’s Second Inaugural Address, which he rightly judges the greatest of his speeches—and (in my view) is perhaps the greatest speech ever made. In it, Brookhiser believes, Lincoln completed his lifelong search for a surrogate father, moving from the Founding Fathers to God the Father. To be sure, this speech, delivered on March 4, 1865, like the Gettysburg Address given some 15 months earlier, resounds with the poetry of the King James Bible, which a childhood friend of Lincoln’s sons’ remembered the president would often read after lunch in the White House, while the children played, “sometimes in his stocking feet with one long leg crossed over the other, the unshod foot slowly waving back and forth” as he kept time to the rhythm of the Elizabethan language’s stupendous music.

(Image: the first photograph taken of Lincoln after he was elected, 1861, via Wikimedia Commons)