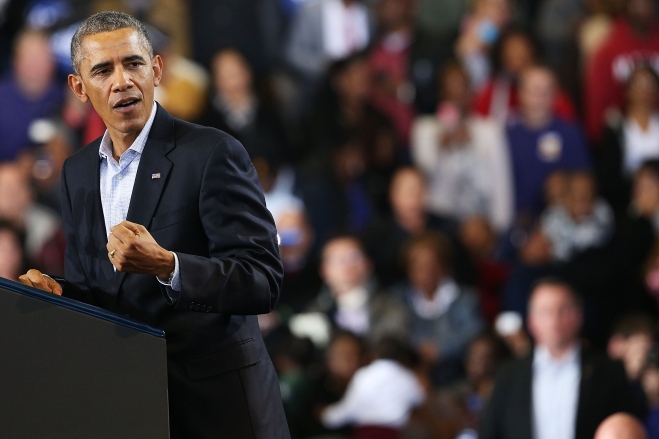 That’s the headline for a Washington Post piece today trying to come up with an answer for the president’s drag on the Democratic fortunes tonight. And, to my mind, it really doesn’t come up with a decent answer. It offers a mere chronology of events and never quite shows what Obama could have done that he didn’t, or what the alternatives truly were. Maybe you’ll find it otherwise. But I found it oddly empty of meaning.

For me, the most persuasive answer to the question was the botched roll-out of healthcare.gov. No one else can be blamed for this, and it hit the president’s ratings like a ten-ton truck, as well it might. October 2013 is when his disapproval rating first clearly topped the approval rating with some daylight and stayed there. And the fall of 2013 was also when he pivoted away from striking Syria – which brought a chorus of disapproval from the Washington bigwigs and, of course, the GOP.

These two events dented his image of competence. Both seemed amateurish to most people. And when an image is altered like that with clearly understandable and very public fuck-ups, it’s hard to regain momentum. Both also followed another nightmarish confrontation with the GOP over the debt limit and a very public failure to pass any gun control legislation even after Sandy Hook.

But what this superficial version of events misses is what happened next. The truth is: the Obama team subsequently achieved a near-miraculous rescue of Obamacare, achieved real success in enrollment, and have seen core healthcare costs slow down in such a way that could yet shift our long-term fiscal liabilities for the better. Obamacare is almost certainly here to stay – surviving one pitched battle after the next. As for Syria, Obama turned that crisis into opportunity, by seizing a compromise brokered by Russia which managed to locate, transport and destroy all but a few traces of Assad’s chemical stockpile. This remains a huge, and hugely under-appreciated achievement – and if you think I’m exaggerating, imagine what the stakes would now be in that region (and the world) if ISIS had a chance to get its hands on that stuff.

The same can be said of the economy. No other developed country has achieved the growth that the US has after the stimulus – including austerity-bound Germany. No other administration has presided over a steeper fall in the deficit. The brutal facts of the twenty-first century global economy has meant this has not been felt very much among the beleaguered middle class. But who is offering on either side a real solution to that by-product of globalization, trade and technology? Again, on the actual substance, Obama has a strong record – dented by the avalanche of hostility from the right and disgruntlement from everyone but the very rich.

Crisis-management? Well, what would the GOP have done with respect to Russia? As it is, that country is more isolated internationally than ever and is being punished economically by sanctions and a tumbling oil price. Ebola? Tell me when we have an outbreak in this country. IS? Again, I dispute the idea that this could have been avoided if the US had entered the Syrian civil war earlier – by funneling arms to rebels who have recently folded or joined al Qaeda. And Obama’s pragmatic response has been a form of containment at IS’ borders – again the least worst option available.

Behind all this has been a fanatically obstructionist and increasingly extreme GOP.

They judged early on that the real promise of Obama – his ambition to transcend the old politics in favor of pragmatic reform – could be killed if they simply refused to play along. That they denied an incoming president any support for a stimulus package in the middle of a spiraling economy was eloquent enough – but we now know of course that this was the strategy hatched privately before Obama even took office.

Then there is the disillusionment of some on the left who regard any use of surveillance against Jihadist terrorism as outrageous (even as they also oppose all other means of fighting the menace), who see Obamacare as a sell-out to the insurance lobby, who wanted much more populism against Wall Street, and who loathe drone warfare and the new campaign against IS. They have the right to object on all these grounds, and I’m sympathetic to some. But they have too often missed the tough reality of protecting American security in the age of global jihad, and no one gives him credit for the remarkable absence of major terror attacks on his watch. They also tend to miss substantive shifts Obama has made in other areas – the toughest emissions standards ever imposed by the federal government, for example, or the astonishing acceptance of marriage equality or openly gay servicemembers – and under-estimated the difficulty of governing in such a deeply polarized electorate.

And so, while I can easily find fault in many areas, I cannot see any substantive reason why Obama has lost altitude. And this – rather than endless accounts of how his popularity has fallen – is what should matter. And I say that particularly to those who supported him with such fervor in 2008 and grit in 2012. If you have real substantive disagreements with his policies, fine. But if this presidency was worth fighting for six years ago, it is worth fighting for again today. He never promised us perfection – merely endurance and persistence in substantively changing the nation and the world for the better. He has easily demonstrated that persistence against truly vitriolic demonization. The easy cynicism and cheap piling on are not, in my view, what he deserves. What he deserves is our support – while we are still lucky to have him in the White House. And that support should not end as the GOP wins tonight and as the Clintons hover in the wings. It should begin again in earnest – and make his actual substantive achievements as durable as they possibly can be.