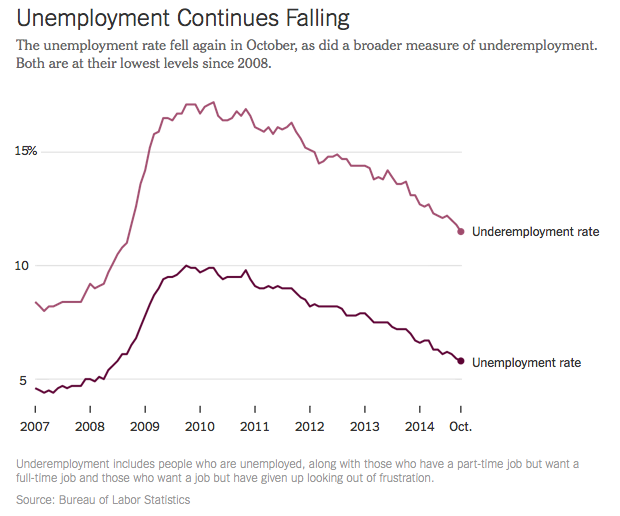 So the number one issue in the midterms was the economy. And a Democratic president has managed to halve the unemployment rate in the wake of a historically grim near-depression, and his own party decided never to mention this – or him – in the campaign. I wish I were surprised. He also managed to slash the deficit at the same time. But shhh … just tell women the GOP is out to get them.

Voters do not always have access to all the relevant data – but they sure can detect political fear. And fear, after all, is what the Democrats have wallowed in for decades since Reagan. Many of them privately believe that their ideas or proposals, however sensible, can never win majority support. So they hide them, or argue for them only before certain constituencies, or play the usual defensive crouch on foreign policy, and bob and weave until the voters are offered a choice between a decisive extremist from the GOP and a quivering pile of jello from the Democrats. The one figure who broke this cycle was Obama in 2008. He managed to do so again in 2012. And yet the default DNA of the Dems is to go back into a defensive crouch, the masters of which are, of course, the Clintons.

You can see it again with the ACA. You couldn’t have a stronger argument: we have given everyone more security in their health, and removed some of the cruelest aspects of the previous system. We have gotten huge numbers of people insured for the first time. And we have managed to halt the rise in healthcare costs in ways that could truly make a dent on future debt. These are huge achievements, but the Democrats couldn’t bring themselves to utter them, let alone craft a narrative of success to contrast with the fear-mongering and nihilism of the Fox News right.

And here’s my point: the defensive crouch doesn’t even work. Waldman marshals some evidence:

Democratic candidates gave Democrats lots of reasons to stay home, particularly those most loyal to Obama. Now let me take a counter-example. The one Democratic Senate candidate in a close race who won on Tuesday was New Hampshire’s Jeanne Shaheen. How did she avoid the fate that befell so many others?

While Shaheen wasn’t exactly begging for Obama to come campaign for her, she didn’t try to “distance” herself from him either. She also didn’t try to execute some double-twisting salchow when it came to the Affordable Care Act, channelling voter displeasure and pretending she shared whatever ill-informed opinion whoever she was talking to happened to have. When she got asked whether she was still proud of it, she said, “Absolutely.” To be sure, she was critical of things that didn’t go well (like the web site roll-out), but no Democratic voter would think she was turning her back on the most important Democratic domestic policy achievement in decades, or dissing their party’s leader.

And for whatever combination of reasons, while turnout was down from 2010 in most places in the country, New Hampshire was one of the few places where it actually increased this year.

A GOP strategist argues along the same lines:

“They sidelined the president,” Rob Collins, the Executive Director of the National Republican Senatorial Committee (NRSC) told reporters at a backslapping post-election briefing. Instead, Collins argued, Democrats shouldn’t have been scared off by Republican attempts to tie Obama to their candidates.

Collins said NRSC polling had long identified the economy as the issues voters cared about most, and one where Democrats stood to gain. “We felt that that was their best message and they sidelined their best messenger,” he said. Collins added that in many states, Democratic candidates had positive stories to tell. “In Colorado, unemployment is 5.1 percent and they never talked about it,” he added.

“They were so focused on independents that they forgot they had a base,” Collins said of Democratic Senate candidates. “They left their base behind. They became Republican-lite.”

They’re a bunch of clueless cowards, as far as I can see. And they have reaped the dividends of fear.