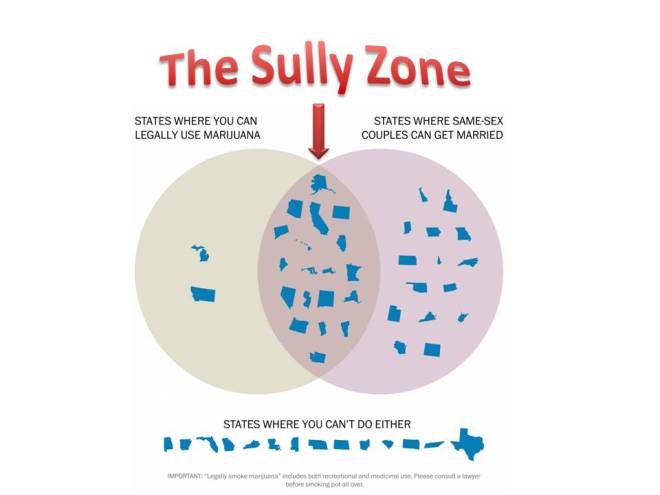 A reader sends the above diagram:

I’m bored at work, so made you this.

Cheers. Jesse Walker also came up with a Venn Diagram for states where you can legally smoke weed and carry a gun. I think he’s trying to reassure us.

Today I focused on attempts to police or control free speech: the move by Twitter to employ some crusaders against patriarchy to improve its prevention of harassment and bile; and the much more serious move by the British government to stamp out extremist thought and speech even if it has nothing to do with inciting violence. We noted the classic mission creep of the new US war in Iraq and Syria; the power of the Greater Israel lobby in bringing together two of the biggest money-men in Republican and Democratic party circles; and featured a baffled Canadian’s response to the mid-terms. The Canadian isn’t the only one puzzled. A reader writes:

Watching the German news I was fascinated by their framing of the American elections. They talk about the “alternative reality of American politics” in which Democrats are on the defensive and Obama is considered such a failure that most Democratic candidates don’t want to be seen with him. I paraphrase the correspondent: “Obama a failure?! With solid economic growth, declining unemployment, and his major program in healthcare reform now an obvious success notwithstanding Republican predictions of catastrophe? Yes, that’s the political alternate reality of America, in which right-wing extremists dominate the airwaves and the political dialogue and most citizens are convinced of ‘facts’ that are political propaganda and not reality.” Sums it up pretty well.

Many of today’s posts were updated with your emails – read them all here.  You can always leave your unfiltered comments at our Facebook page and @sullydish. 20 more readers became subscribers today. You can join them here – and get access to all the readons and Deep Dish – for a little as $1.99 month. Gift subscriptions are available here. Dish t-shirts are for sale here, including the new “Know Dope” shirts, which are detailed here.