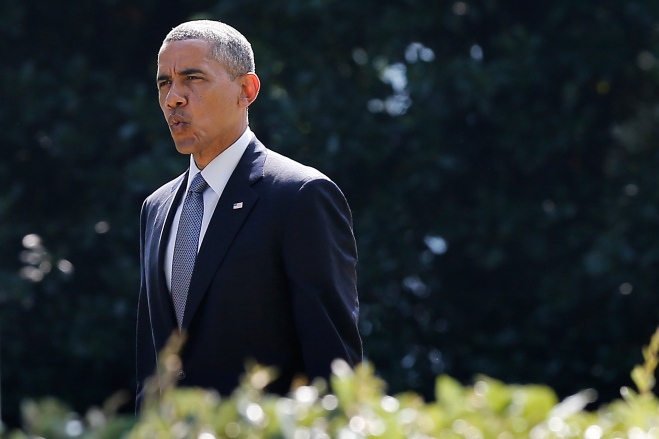 Cast your mind back, if you can bear it, to the frenetic last days of the campaign in the mid-terms. The world, the GOP kept insisting, was coming undone – and everything was Obama’s fault. Somehow, Obama had fumbled the response to Ebola, letting infected people into the country, and risking a huge and fatal pandemic. At the same time, ISIS represented a grave threat to American security, was expanding with no limits in sight, proving that Obama had lost Iraq or thrown “victory” away in an act of reckless disengagement. And for good measure, Russia’s Putin was running rings around the president, creating a new world order in the Caucasus, while Obama fecklessly wrung his hands.

As a piece of political performance art, you have to hand it to the Republicans. They rolled up so many base-tingling themes into one hellish, end-times scenario: Obama as Carter, unable to stand up to the Russians; Obama as secret Muslim terrorist, standing by as Islamists terrorized Iraq and Syria; Obama as a dangerous import from Africa, which is why, we were told, the “O” in Ebola stood for Obama.

Funny, isn’t it, that almost all these themes evaporated after the election. And we now, moreover, have more time and evidence to judge how the president has responded to these different, emergent challenges. There have been no new Ebola cases in the US since the election; and the demon doctor who went bowling is now cured. Today, Obama touted some other measures of progress:

hospitals across the country to deal with Ebola patients. It also said that the number of labs that can test for Ebola has increased from 13 in 13 states in August to 42 labs in 36 states. The White House said the administration has also increased the deployment of civilians and military personnel in West Africa, bumping the U.S. presence to about 200 civilians and 3,000 troops. It said the U.S. has opened three Ebola treatment units and a hospital in Liberia …

NIH researchers last week reported that the first safety study of an Ebola vaccine candidate found no serious side effects, and that it triggered signs of immune protection in 20 volunteers. U.S. health officials are planning much larger studies in West Africa – starting in Liberia in early January – to try to determine if the shots really work.

The downside? The GOP is unlikely to apportion enough money to keep the progress up. Concern about Ebola seems to be acutely timed to election campaigns. Afterwards? No longer that worried.

Then the campaign against ISIS. I’m still opposed to what the administration has done. But it behooves me to note today’s key measure of real progress – the new Iraqi prime minister’s deal with the Kurds on oil revenues:

In reaching a deal, Mr. Abadi, who has been prime minister for less than three months, has further distanced his government from a legacy of bitter sectarian and ethnic division under his predecessor, Nuri Kamal al-Maliki. As prime minister, Mr. Maliki deeply alienated the Kurds and enraged Iraq’s Sunni Arab minority with his confrontational personality and policies that were seen as both exclusive and abusive. “The new team, under Abadi, is a cooperative team, a positive team,” said Mr. Zebari, a Kurdish politician who was also Iraq’s foreign minister in the Maliki government.

This is the easy part, compared with an attempt to include the currently revolting Sunnis into a genuinely multi-sectarian government, and to roll back the territorial gains of the Islamic State. But it’s a start. My own skepticism about whether Abadi was truly a unifying figure deserves provisional retirement. And the IS has been rolled back in several key areas. And Kobani has not fallen. If you take Obama’s posture at face value – that he was trying to prevent much worse happening in Iraq and laying out a years-long strategy to nudge Iraq’s democracy along – I can’t see clear evidence that he has failed. Within the very limited goals he set, he has so far succeeded.

The right was all aglow either with envy of the diminutive tantrum-thrower or with disgust that he had so easily rolled the West on Ukraine. Many found the slow, undramatic unfolding of sanctions as pathetically weak in the face of such unvarnished aggression. But, again, look where Putin is now. I’m with Kevin Drum:

Ukraine is more firmly allied to the West than ever. Finland is wondering if it might not be such a bad idea to join NATO after all. The Baltic states, along with just about every other Russian neighbor, are desperate to reinforce their borders – and their NATO commitments. Russia has been dumped from the G7 and Putin himself was brutally snubbed by practically every other world leader at the G20 meeting in Brisbane. Economic sanctions are wreaking havoc with the Russian economy. China took advantage of all this to drive a harder bargain in negotiations over the long-planned Siberian gas pipeline. Even Angela Merkel has finally turned on Putin.

Russia, meanwhile, is headed for an outright recession next year, hobbled by sanctions and the collapsing oil price (caused in part by America’s shale oil revolution in the Obama years). Now, as with Ebola and ISIS, there are obvious caveats. Obama’s successful cornering of Putin could mean the dictator could get even more reckless; Ukraine remains torn apart in the East. But from the perspective of now, does Putin seem the stronger strategist or does Obama?

I point this out because the conservative media-industrial complex is really about delivering news that can work as political messaging. When the news doesn’t fit that template, they move swiftly on to something else that does. But reality tells us something different: that you should judge a presidency not by short-term panics, but by long term progress in the face of contingent events. Six years after the worst recession since the 1930s, we have accelerating growth, a collapsing deficit, falling healthcare costs and universal health insurance; a decade after the Federal Marriage Amendment, we have over 30 states with marriage equality; six years since Obama took office, we have the toughest new carbon regulations yet on the books and an agreement with China.