Here is one of the most spectacular shifts in public opinion in our lifetime. 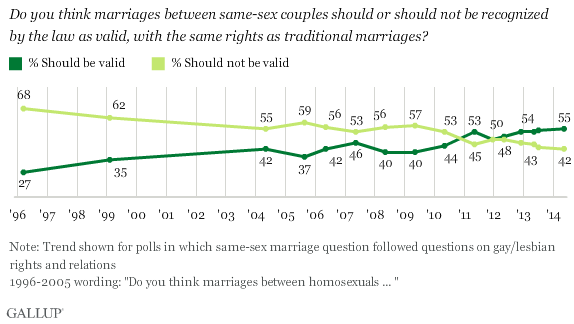 One family of influential theories says that our political opinions are “motivated” by certain deep-seated emotional needs. According to one version, the “system justification theory” of Jon Jost, variation in the need to justify the status quo distribution of goods and power in society determines whether one has a broadly liberal or conservative worldview. In other versions of the needs-based theory, our opinions are said to be fixed by the degree to which we are or are not dominated by a need to preserve comforting illusions, or, alternatively, the need to manage uncertainty and fear.

A related line of inquiry posits that variations in political opinion arise from ingrained differences in personality and moral sensibility. Jonathan Haidt’s “moral foundations theory” is probably the best-known. Variation on the six foundations of the moral sense explains whether you have a liberal, conservative, or libertarian cast of mind. All these theories imply that our “values” and corresponding political views reflect idiosyncrasies of personality more than material interests. Indeed, the current consensus view among political psychologists and public-opinion researchers is that, contrary to older tradition in economics and political science, self-interest explains very little about our political alignments and commitments.

What is often overlooked is that both old-fashioned self-interest theories and new-fangled personality-based theories of political opinion are pretty much useless in accounting for the sort of sea change in opinion captured by the chart above. Was there a wild change in people’s interests between 1996 and now? No. Did the distribution of personality types in the American population undergo a rapid transformation. No. It’s a lot simpler than that. People changed their minds.

Until recently, the prevailing belief in our culture was that homosexuality is a sort of mental illness and that it’s practice threatens the integrity of  the family and, thereby, the integrity of the entire social order. Almost anyone  who has adopted these beliefs, whatever their temperament or interests, is going to want to think that it is in his or her interests, and in the interests of society generally, to officially discourage homosexuality. But when large numbers of people stop believing, as a matter of empirical fact, that there is something unhealthy or socially dangerous about homosexuality, opinion about its “justifiability” – and about the justice of denying equal rights to gay and lesbian couples – changes without any corresponding change in anyone’s underlying psychology or interests. Indeed, support for gay marriage has accelerated and opposition has weakened most rapidly as the old speculative worries are disproven by the anodyne, homey reality of families headed by officially-sanctioned same-sex couples.

Beliefs matter. Public opinion will always reflect factional interest and the range of temperaments. But we have no magical ability to intuit what’s in our interests; we can only ever act on beliefs about our interests. And moral personality may be more or less fixed, but the things that dispositionally conservative or liberal happen to believe change a great deal over time as beliefs about the world change. I’m of the generation that was in young adulthood in 1996, at the start of that Gallup chart, when opposition to gay marriage seemed insurmountable. Over the past two decades I’ve seen conservative-minded friends go from profound moralized disgust about homosexuality to shrugging indifference as their beliefs around the nature and consequences of homosexual behavior have drifted with the cultures. My father’s generation went through something similar with respect to mixed-race relationships. Now it’s true that we are imperfectly rational creatures, and that there is a great deal of “motivated cognition” – a tendency to believe what we find comforting to believe. But I think it’s clear enough that these are frictions that can be overcome, and often are overcome. This is a cause for hope.

One of the great issues of our day is prison reform. America imprisons a larger share of its population than any other country on Earth. The main reason for this is that, over the last few decades, thanks in large part to the War on Drugs, we have changed sentencing guidelines such that more crimes are met with prison sentences, and sentences for most crimes have become longer. It can seem that the American carceral state is so dug in that it is impossible to change it. But I think it is largely a matter of belief. At some point in the past, we came to believe that we were too soft on crime – that punishments were unjustly and dangerously lax – so we made them harsher. To turn things around, we’ve simply got to change our minds again. Punishments are too harsh. Millions of Americans who do not deserve to be put in cages are put in cages, and millions who deserve to put in cages for a time are kept there for far too long, often ruining their entire lives. This is an appalling injustice, even aside from the appallingly unjust racial bias in the system. This should be intolerable for country culturally committed to an ideal of liberty. But we can change it. We’re not locked in by a confluence of interests or by intractable features of the tough-on-crime conservative personality. Americans simply need to believe that such long prisons sentences are wrong. Americans need to believe that crime-rates are at a historic low, that high incarceration rates are not the main reason why, and that they and their children will not be endangered by reforms that restore proportionality, judicial discretion, and justice to sentencing.

Now, some progressives are fixated on the idea that a vague set of systemic social forces they call “neoliberalism” is responsible for the American gulag state – and everything else wrong the world. The implication is that things can’t get better until we throw over neoliberalism (whatever that is) and replace it with a rarely-specified utopia of social justice. This is pernicious nonsense. Rather than move us closer to social justice, the all-or-nothing, everything-is-connected holism of the anti-neoliberals pushes us instead toward fatalistic complacency and impotent shotgun gestures against “the system.” Andrew’s focused, reasoned arguments in favor of gay marriage in time caught on and now Andrew is married. This should be our model. If Andrew and Jon Rauch and all the others who doggedly, patiently, and rationally made the case for gay marriage had instead chosen to rage against the comprehensive injustice of the machine and the cold hypocrisy of the American heart, it never would have happened. You can’t change the system by changing beliefs about the system. You change the system one issue, and one constellation of convictions, at a time.