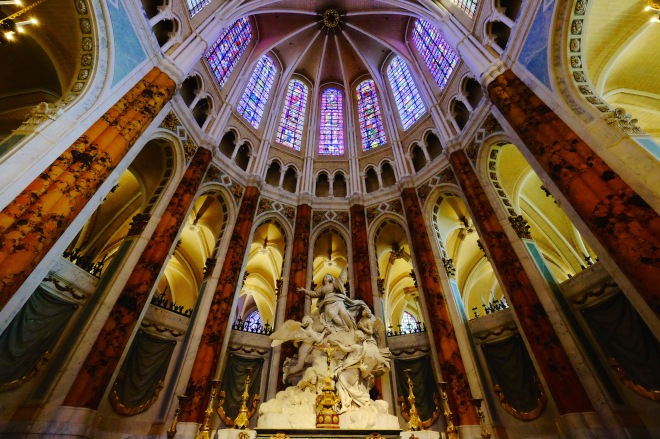 Martin Filler received an unpleasant surprise on a recent trip to Chartres Cathedral:

Carried away by the splendors of the moment, I did not initially realize that something was very wrong. I had noticed the floor-to-ceiling scrim-covered scaffolding near the crossing of the nave and transepts, but had assumed it was routine maintenance. But my more attentive wife, the architectural historian Rosemarie Haag Bletter—who as a Columbia doctoral candidate took courses on Romanesque sculpture with the legendary Meyer Schapiro and Gothic architecture with the great medievalist Robert Branner—immediately noticed that large areas of the sanctuary’s deep gray limestone surface had been painted.

The first portion she pointed out was a pale ochre wall patterned with thin, perpendicular white lines mimicking mortar between masonry blocks. Looking upward we then saw panels of blue faux marbre, high above them gilded column capitals and bosses (the ornamental knobs where vault ribs intersect), and, nearby, floor-to-ceiling piers covered in glossy yellow trompe l’oeil marbling, like some funeral parlor in Little Italy.

More on the ghastly decision:

In 2009, amid a rising wave of other refurbishments of medieval buildings, the French Ministry of Culture’s Monuments Historiques division embarked on a drastic, $18.5 million overhaul of the eight-hundred-year-old cathedral.

Though little is specifically known about the church’s original appearance—despite small traces of pigment at many points throughout the interior stonework—the project’s leaders, apparently with the full support of the French state, have set out to do no less than repaint the entire interior in bright whites and garish colors that are intended to return the sanctuary to its medieval state. This sweeping program to “reclaim” Chartres from its allegedly anachronistic gloom is supposed to be completed in 2017.

The belief that a heavy-duty reworking can allow us see the cathedral as its makers did is not only magical thinking but also a foolhardy concept that makes authentic artifacts look fake. To cite only one obvious solecism, the artificial lighting inside the present-day cathedral—which no one has suggested removing—already makes the interiors far brighter than they were during the Middle Ages, and thus we can be sure that the painted walls look nothing like they would have before the advent of electricity.

Dreher calls the move a “desecration”:

Back in 2009, the Independent published an upbeat report on the repainting, which had just begun. Excerpt:

Mr Fresson [the historian overseeing the renovation] expects some visitors to Chartres to be taken aback – maybe even angered – by the transformation. “There is no doubt that we will lose something, even if we gain a great deal,” he said. “The sense of mystery, the sense of the passing ages, which you receive when you enter the dark interior of today will be replaced by something fresher and much more dynamic.”

Yes, we cannot have a sense of mystery. Freshness and dynamism, that’s the ticket. Good Lord. You expect this in America, but in France?

I am grateful that I was able to see the cathedral as it was. My children will live their entire lives without that privilege.

(Photo of the interior of Chartres Cathedral by Daniel Stockman)