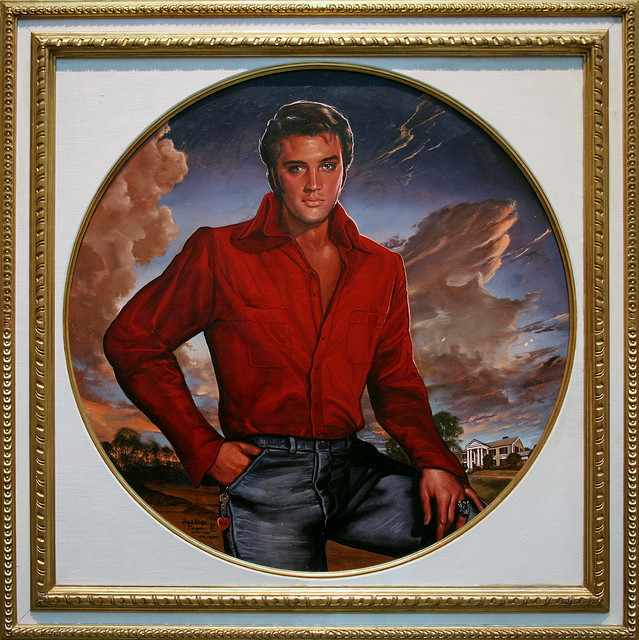 Today would have been the music legend’s 80th birthday, assuming you believe he’s dead. Adrienne LaFrance ponders our varied perceptions of the man and his demise:

The tricky thing about Elvis [is] that people can’t agree on the Elvis they think they know. There’s the Elvis who died in 1977, and the Elvis who’s still alive and eating cheeseburgers in western Michigan. There’s Elvis the hip-swiveling hunk who could break your heart, and Elvis the doughy 40-something who couldn’t get through a performance without stumbling over his words. This duality was strong enough that it prompted debate about which Elvis ought to be depicted on a postage stamp. From The New York Times in 1992:

“Postal authorities are not sure which Presley likeness to use: the young, svelte, hip-gyrating Elvis of the rock-and-roll ’50s, or the rotund, road-worn Elvis who died in 1977 near the end of the Age of Aquarius, reportedly after a struggle with drugs.”

If conspiracy theories are a way to impose order on events that can’t be controlled, Elvis sightings are perhaps a way of rejecting mortality, and preserving the American dream he came to represent. After all, it wasn’t just Elvis’ death that challenged his place in American culture, but his actual life. Insisting Elvis never died is also, then, a way of rejecting what he had become.

If you’re talking about Elvis, why not include the finest Elvis-related song if all time, Mojo Nixon’s “Elvis is Everywhere”:

On a higher brow note, I recommend the Philip K Dick award-winning novel Elvissey by Jack Womack. This sci-fi novel has corporate commandos sent to an alternate version of Earth to kidnap a young Elvis in order to use him as their nouveau Messiah in a world where Christianity has been discredited.

Your post made me think about Bubba Ho-Tep, one of the strangest and most delightful films I have ever seen. It centers around an elderly Elvis living in a rundown retirement home in East Texas, having switched places with an Elvis impersonator in the early 1970s in order to get away from all the fame and the pains that came with it. He befriends a man, played brilliantly by Ossie Davis, who believes himself to be JFK (a harebrained and delightful explanation is given) and together they fight a mummy who is sucking the souls of their fellow residents through there assholes.

As I said, it is a very strange story. But it is also a story about death, fame, old age, family, heroism, peace of mind and above all else, Elvis himself. It received a very small theatrical release but after very positive reviews from several top critics (and tremendous praise for the performance of Bruce Campbell who played Elvis) it gained a cult following. As Roger Ebert said:

The King explains all of this in a thoughtful, introspective voice-over narration that also deals with other matters on his mind, such as the alarming pustule on that part of his anatomy where it is least welcome. He talks about Priscilla and Lisa Marie, about his movies (not a single good one), about his decision to disappear, and about how he broke his hip falling off a stage. This narration is not broad comedy, but wicked, observant and truthful. “Bubba Ho-Tep” has a lot of affection for Elvis, takes him seriously, and — this is crucial — isn’t a camp horror movie, but treats this loony situation as if it’s really happening