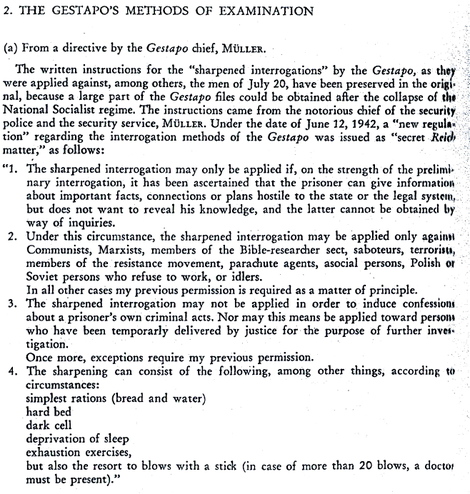 The phrase "Verschärfte Vernehmung" is German for "enhanced interrogation". Other translations include "intensified interrogation" or "sharpened interrogation". It’s a phrase that appears to have been concocted in 1937, to describe a form of torture that would leave no marks, and hence save the embarrassment pre-war Nazi officials were experiencing as their wounded torture victims ended up in court. The methods, as you can see above, are indistinguishable from those described as "enhanced interrogation techniques" by the president. As you can see from the Gestapo memo, moreover, the Nazis were adamant that their "enhanced interrogation techniques" would be carefully restricted and controlled, monitored by an elite professional staff, of the kind recommended by Charles Krauthammer, and strictly reserved for certain categories of prisoner. At least, that was the original plan.

Also: the use of hypothermia, authorized by Bush and Rumsfeld, was initially forbidden. ‘Waterboarding" was forbidden too, unlike that authorized by Bush. As time went on, historians have found that all the bureaucratic restrictions were eventually broken or abridged. Once you start torturing, it has a life of its own. The "cold bath" technique – the same as that used by Bush against al-Qahtani in Guantanamo – was, according to professor Darius Rejali of Reed College,

pioneered by a member of the French Gestapo by the pseudonym Masuy about 1943. The Belgian resistance referred to it as the Paris method, and the Gestapo authorized its extension from France to at least two places late in the war, Norway and Czechoslovakia. That is where people report experiencing it.

In Norway, we actually have a 1948 court case that weighs whether "enhanced interrogation" using the methods approved by president Bush amounted to torture. The proceedings are fascinating, with specific reference to the hypothermia used in Gitmo, and throughout interrogation centers across the field of conflict. The Nazi defense of the techniques is almost verbatim that of the Bush administration… 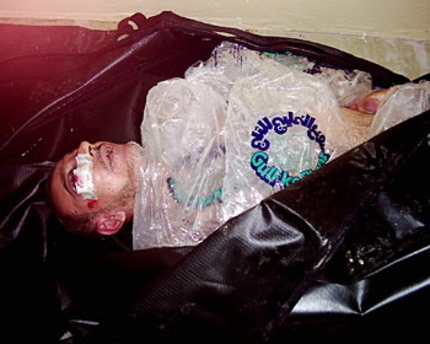 Between 1942 and 1945, Bruns used the method of "verschärfte Vernehmung" on 11 Norwegian citizens. This method involved the use of various implements of torture, cold baths and blows and kicks in the face and all over the body. Most of the prisoners suffered for a considerable time from the injuries received during those interrogations.

Between 1942 and 1945, Schubert gave 14 Norwegian prisoners "verschärfte Vernehmung," using various instruments of torture and hitting them in the face and over the body. Many of the prisoners suffered for a considerable time from the effects of injuries they received.

On 1st February, 1945, Clemens shot a second Norwegian prisoner from a distance of 1.5 metres while he was trying to escape. Between 1943 and 1945, Clemens employed the method of " verschäfte Vernehmung " on 23 Norwegian prisoners. He used various instruments of torture and cold baths. Some of the prisoners continued for a considerable time to suffer from injuries received at his hands.

Freezing prisoners to near-death, repeated beatings, long forced-standing, waterboarding, cold showers in air-conditioned rooms, stress positions [Arrest mit Verschaerfung], withholding of medicine and leaving wounded or sick prisoners alone in cells for days on end – all these have occurred at US detention camps under the command of president George W. Bush. Over a hundred documented deaths have occurred in these interrogation sessions. The Pentagon itself has conceded homocide by torture in multiple cases. Notice the classic, universal and simple criterion used to define torture in 1948 (my italics):

In deciding the degree of punishment, the Court found it decisive that the defendants had inflicted serious physical and mental suffering on their victims, and did not find sufficient reason for a mitigation of the punishment in accordance with the provisions laid down in Art. 5 of the Provisional Decree of 4th May, 1945. The Court came to the conclusion that such acts, even though they were committed with the connivance of superiors in rank or even on their orders, must be regarded and punished as serious war crimes.

The victims, by the way, were not in uniform. And the Nazis tried to argue, just as John Yoo did, that this made torturing them legit. The victims were paramilitary Norwegians, operating as an insurgency, against an occupying force. And the torturers had also interrogated some prisoners humanely. But the argument, deployed by Dick Cheney, Donald Rumsfeld, and the Nazis before them, didn’t wash with the court. Money quote:

As extenuating circumstances, Bruns had pleaded various incidents in which he had helped Norwegians, Schubert had pleaded difficulties at home, and Clemens had pointed to several hundred interrogations during which he had treated prisoners humanely.

The Court did not regard any of the above-mentioned circumstances as a sufficient reason for mitigating the punishment and found it necessary to act with the utmost severity. Each of the defendants was responsible for a series of incidents of torture, every one of which could, according to Art. 3 (a), (c) and (d) of the Provisional Decree of 4th May, 1945, be punished by the death sentence.

So using "enhanced interrogation techniques" against insurgent prisoners out of uniform was punishable by death. Here’s the Nazi defense argument:

(c) That the acts of torture in no case resulted in death. Most of the injuries inflicted were slight and did not result in permanent disablement.

This is the Yoo position. It’s what Glenn Reynolds calls the "sensible" position on torture. It was the camp slogan at Camp Nama in Iraq: "No Blood, No Foul." Now take the issue of "stress positions", photographed at Abu Ghraib and used at Bagram to murder an innocent detainee. Here’s a good description of how stress positions operate:

The hands were tied together closely with a cord on the back of the prisoner, raised then the body and hung the cord to a hook, which was attached into two meters height in a tree, so that the feet in air hung. The whole body weight rested thus at the joints bent to the rear. The minimum period of hanging up was a half hour. To remain there three hours hung up, was pretty often. This punishment was carried out at least twice weekly.

This is how one detainee at Abu Ghraib died (combined with beating) as in the photograph above. The experience of enduring these stress positions has been described by Rush Limbaugh as no worse than frat-house hazings. Those who have gone through them disagree. They describe:

Dreadful pain in the shoulders and wrists were the results of this treatment. Only laboriously the lung could be supplied with the necessary oxygen. The heart worked in a racing speed. From all pores the sweat penetrated.

Yes, this is an account of someone who went through the "enhanced interrogation techniques" at Dachau. (Google translation here.)

Critics will no doubt say I am accusing the Bush administration of being Hitler. I’m not. There is no comparison between the political system in Germany in 1937 and the U.S. in 2007. What I am reporting is a simple empirical fact: the interrogation methods approved and defended by this president are not new. Many have been used in the past. The very phrase used by the president to describe torture-that-isn’t-somehow-torture – "enhanced interrogation techniques" – is a term originally coined by the Nazis. The techniques are indistinguishable. The methods were clearly understood in 1948 as war-crimes. The punishment for them was death.