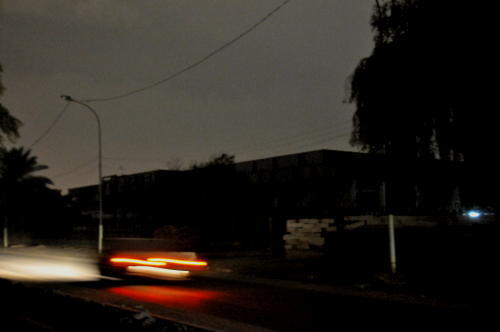 Michael Totten has a wonderfully detailed, powerfully honest account of the surreal nature of Baghdad today – still a wreck but not a total war zone, dark as a forest at night, in a lull whose future is unknowable. Money quote:

I stayed outside and talked to Sergeant Pennartz who stood watch on the porch.

“On the surface everyone will tell you Sunnis, Shias, we don’t care, we’re all Iraqis,” Sergeant Pennartz said. “But talk to them for a while and they’ll tell you what they really think. Do you know what those Shias did? Et cetera. Some Sunnis say Shias were never in Iraq until the Iran-Iraq war. Some are totally ignorant and say they’ll never live next to Shias.”

We eventually climbed back in the Humvees and headed back toward the FOB. On the way I saw orange trees covered in dust behind crumbling walls. Wild dogs ran in the streets. Iraqi Police officers huddled around a fire to keep warm like bums around a burning trash can in The Bronx.

“Sometimes,” Lieutenant Dimenna said, “during the worst of the rainy season, the sewage here gets up to ankle level.”