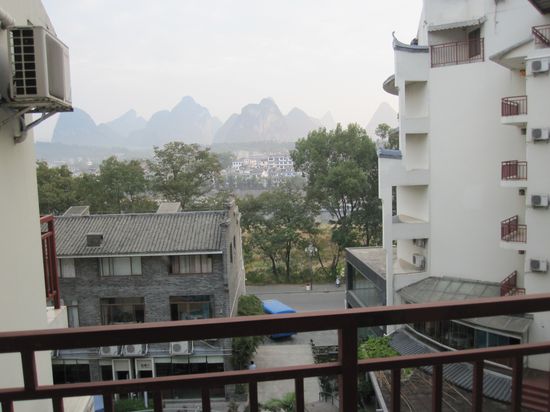 So those pretty unique mountain formations immediately make one think of Southern China or Vietnam. But seeing as I’m getting to this particular contest 24 hours late and many guesses that fall within China and Vietnam have probably already been submitted, I think my best bet of winning this book is to cross my fingers and hope this was taken somewhere else in the region. It’s clearly an urban space, blue bus public transportation and all. I’m going to take a wild stab in the dark and say Phnom Penh, Cambodia.

I believe this one is from Rio de Janeiro. Or, perhaps to be more precise, Niteroi, Brazil (which lies across the bay from Rio). I believe I can see the famous statue of Christ the Redeemer in one of the mountains.

I first saw AC units like that in China, so I’m thinking it’s there, and likely in the southern part of the country. A bit of a stab in the dark, but Suzhou? (Looking forward to laughing in a couple of days when I find out I guessed the wrong continent.)

The hills in the background of the photo remind me of the ones in coastal southwestern Turkey (but they also remind me of China, so who knows).  I’m going to guess Fethiye, Turkey for the heck of it – also because the white building on the right also reminds me of Turkish construction.

This is clearly China.  The mountains in the background are a dead giveaway. I am amused at myself for recognizing this based on Art History classes in Chinese landscape painting from many, many years ago.  Beyond that I need to guess; I pick Huangshan.

I’m probably the hundredth person to guess this, but Vietnam, Halong Bay?  (Beautiful place, but the tourist scene is out of control and really detracts from the experience. Still, it’s a must if you’re ever in Vietnam. It really is one of the wonders of the world.)

About 20 people did guess Halong Bay, but no dice. Another:

I think this may be Guilin, China. I went there on holiday with my family when I was 14 (am now 21). A guy in our group had been there in the ’70s and remembered local people holding their children up to the window of the restaurant he was eating in. They’d never seen a white man before. If it’s not Guilin, then this little story is fairly pointless. Still, beats looking out of my own window in Abingdon, UK. Industrial estates leave much to be desired.

Guilin is getting warmer. Another:

Spectacularly wrong. This reader nails it down:

Is it Yangshuo, China?  If it is, it took only one guess (China) and one Google image search (chinese mountains) to get it right.  Thank Google!

About 50 readers also got Yangshuo (a third of the 600 entries correctly guessed Guilin, but Yangshuo is the more specific political division). The first reader to do so was D.I., who wrote:

Yangshuo in Guilin Province, China, on the Li River. Just a guess based on the karst mountains.

Rain water and ground water are slightly acidic and will dissolve carbonate rocks. In Missouri, we get caves. In China, it results in spectacular pinnacles.

Congrats to D.I.!  Next contest goes up Saturday at noon.