Hmmm, red tile roofs, palm trees, sun in the west (or east?) … this has to be in southern Italy. I'm going off a hunch that it's on the northern coast of Sicily. I'm going with Cefalu because this does not quite seem like Palermo.

My partner and I, wrapping up a vacation with our boys in your fair city, recognize those roof tiles as being the same as those we saw in the walled portion of the beautiful city of Dubrovnik, where we honeymooned in 2003. The roof tiles were in patches of lighter and darker hues reflecting original tiles untouched by the shells of the Serbs, and replacement tiles. This scene looks to be not in Dubrovnik proper, so we will guess just north of Dubrovnik. The Adriatic looks just as calm in this photo as we remember it.

I'm guessing this is a Portuguese island, and since I've never been to the Azores, I'm going with Funchal, Madeira. The red tiles, the satellite dishes, the marine haze, and the water being far below, as though the buildings were above a steep grade, remind me of Madeira. I didn't submit a guess of Portugal (#53) or a former colony like Mozambique (#54), the last times I saw those red tiles, and I really should have at least tried. I had just got back from Madeira and sent in a VFYAW that was posted.

Spent a lot of time looking up the red satellite dish and where they was used. Unfortunately the only place I could find that had red satellite dishes were Thailand. Since your clue said it was in the Western Hemisphere I will just throw out a guess: Limon, Costa Rica.

Best spam ever. Another reader:

The Breakers, Palm Beach, Florida? A wild guess. But who are those men on the roof?

Las Gaviotas, Baja California is a walled community a north of Ensanada.  It's a great place for Southern Californians to take a brief respite from Southern California by going to "Mexico," and staying in a walled fortress where the homes are built with nearly adjoining walls.   The entrance is guarded by Federales whose enforcement of the community's rules (no pot! no nudity!) comes with the implied threat of a Mexican jail.  It's a lot funner than it sounds, especially if you like drinking on a balcony overlooking the Pacific while anticipating lobster and tuna steaks for dinner.  Also, it has a semi-decent surf break within its confines, which is a plus, as none of the local Baja hoodlums can make it past the Federales to threaten your wave.  Instead, you get threatened by the same cretin from Orange County you went there to avoid in the first place.  In any case, the view from the window looks like it was taken from one of the houses that its in the back of the compound, which would put it way to close to the old highway to be nice house …

Even though I'm probably wrong, I appreciate the opportunity to wax nostalgic about Las Gaviotas, I spent more time there with great friends, having great times, than was healthy.

Cancun, Mexico? This is the first time I've even been close to recognizing the VFYW. Maybe it's just the fact that I used to go to Mexico every year around this date on the calendar, but that looks a lot like  the Yucatan peninsula. Or maybe it's Puerto Vallarta …

First time entry, and I knew it the moment I saw it!  This has to be a view out toward the sea from the center of town in Puerto Vallarta, Jalisco, Mexico.  My best guess is that the picture was taken from the building at the northwest corner of Matamoros and Galeana.  I recognized the Malecon immediately, the wonderful seaside promenade that has just been completely redone and is beautiful.  And the white double-hipped roof must be right next to Senor Frogs – that awful tourist trap no one should get caught in.  My boyfriend and I just strolled this stretch of town when we were down visiting his parents for Thanksgiving.  They live in the very gay Zona Romantica – very helpful in luring their son to visit.

The view is of buildings overlooking Puerto Vallarta's Malecon. It's of a special spot too; a pivotal location in a great movie that helped put Vallarta on the map and gave it a place in Hollywood romance lore. As every guidebook and tourist map will tell you (over and over again), Puerto Vallarta was made famous to Northerners by John Huston's 1964 Night of the Iguana, and by Elizabeth Taylor and Richard Burton, who conducted their notorious affair there throughout its filming.

In the movie, Burton plays Reverend Lawrence Shannon, a disgraced priest who's been kicked out of his own church for being too hands-on with a "very young Sunday school teacher." He's now a tour guide and his current, thankless task is shuttling a group of Baptist schoolteachers around Mexico. These hens are headed by a suspicious, joyless harridan who is chaperoning her Lolita-like niece (played, naturally, by Sue Lyon). It's an impossible situation.

What's special about the spot shown in the contest photo? In the lower left, in the open space with the palm trees, you'll see a stubby black and white striped truncated obelisk. It's an old light house. Watch for it in this video at the forty-two second mark; you'll see that this week's VFYW is of the exact location where Burton's Reverend Shannon loses his shit:

I'm sure you'll get a ton of correct submissions for this one – the view is instantly recognizable if you've spent any time walking around PV's old town. (The iron bars on the windows are a recognizable feature too – sadly, they are everywhere there and they are not decorative.) The window is on the top floor of the Condominio Marina Del Rey, on the corner of Calle Galeana and Calle Matamoros. Specifically, it's at 20°36'34.45"N, 105°14'0.53"W

Another who got the right address:

We enjoyed this one.  The red satellite dish stood out.  The logo seemed to match Dish Network, which limited it to the US, Canada, and Mexico.  But the red dish itself only appears in images from Mexico.  The silhouettes on top of the building seemed like it would be helpful, but no dice (afterwards we found that they don't even appear on Google's latest street view of the area).  The small "lighthouse" on the left seemed like a longshot.  But a math prof at University of North Carolina apparently really likes light lighthouses.  Bingo!  There's our light house.

What the heck is that SWAT team doing on the roof of the building at the center of the photo? Maybe Malia Obama visited Puerto Vallarta during her spring break trip to Oaxaca?

Another finally solves the mystery:

This week's photo was taken from one of the condos facing the ocean, I'm guessing the 3rd floor, at Condominio Marina del Rey, 511 Matamoros in Puerto Vallarta, Jalisco, Mexico.  I was just in Puerto Vallarta last week on a side trip from Guadalajara where we were visiting my husband's family; it is a lovely town.  The building in the center of the photograph along the malecon and next to the lighthouse houses La Destileria restaurant and the building just in front of it with the twin peaked silver roof is Senor Frogs.  The small black figures that you see on the roof of the building to the right are cutouts of KISS and assorted other rockers that adorn the Bebotero Bar:

Determining the winner this week was tough, but the following reader has gotten the highest number of previous views correct without winning yet:

After getting stumped on a few previous ones, I'm glad to see you post a place that I would recognize anywhere.  The giveaway is the small lighthouse (el faro) which places this in Puerto Vallarta, a place I know very well.

Originally famous because of the gossip and tawdry details surrounding the Night of the Iguana, the town has grown dramatically over the last few decades.  It is now quite a popular destination for Canadians and Americans and has a very active gay scene. Frankly, I would recommend it for your next vacation; it's hard to beat its Mexican charm, food or views of the bay, especially in the surrounding towns of Mismaloya and Boca de Tomatlan.  I've been going there since I was a kid, and as much as it has changed, it's still one of my favorite Mexican beach towns.

As to the specific location, this seems to have been taken from the Condominios Marina del Rey, 511 Matamoros, some condominiums with enviable views of the bay. It's impossible to get a picture of the windows from the front, but I've attached a picture using Google street view: 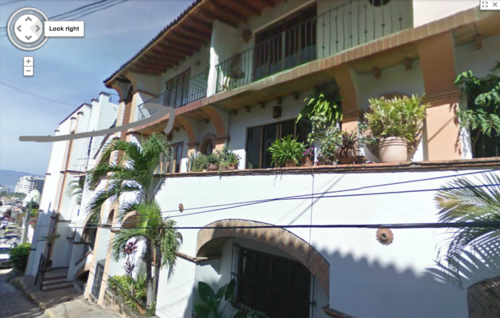 I'm guessing that this picture was taken from the third floor on the easternmost window. After getting so many near misses, I'm hoping this one finally does the trick.

The caption from the submitter: