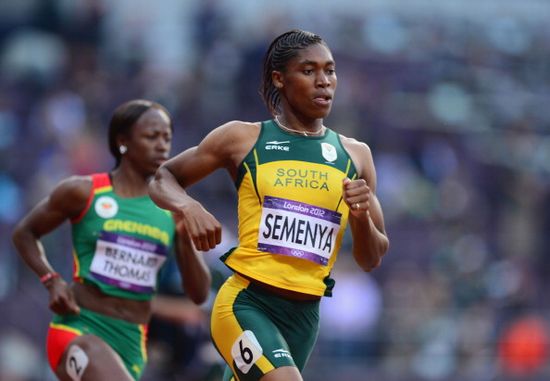 Epstein’s writing betrays an outrage about the treatment of Semenya that’s increasingly consistent with the discussion in both the blogosphere and in Dish inbox. The path to this understanding, though, should halt any back-patting. Semenya is the first high-profile target of gender testing to have much of anyone on her side. The history of gender controversy involves a litany of injustices dating back decades. These resulted from our evolving understanding of intersexuality’s many complexities, but also from the blunt instrument of bureaucratic bigotry. The first major gender “scare” episode concerned an exceptionally loyal Hitler Youth. Explains TransGriot:

The watershed year for the paranoia behind men competing in women’s international sporting events is 1936. Nazi Germany wanted the Berlin Olympics to be a political 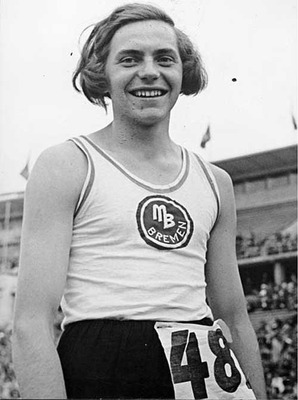 showcase for the Third Reich. They set the goal of surpassing the 21 total medals Germany won in the 1932 Los Angeles Games, and one way they sought to do that was sneaking their ‘supermen’ into the women’s events. To accomplish that goal, the Nazis forced Hitler Youth member Hermann Ratjen to live and compete for three years as Dora Ratjen…. Dora was busted while traveling in Germany after the European championships. While wearing feminine attire Ratjen was spotted at a train station with five o’clock shadow on his face. A doctor was summoned, and the truth about Dora’s actual genitalia was revealed. Ratjen was barred from competing in international athletics and went back to his life as Hermann.

The Berlin Games also marked the beginning of the “she’s a man” slur – which still proves useful. For instance, in the case of the rivalry between sprinters Helen Stephens and Stella Walsh:

Walsh, angry about being beaten by her rival, promptly threw ‘that’s a man’ shade at Stephens which the Polish press amplified. She protested to officials that Stephens was really a man falsely running as a woman because no woman could run that fast. German officials examined Stephens, pronounced her female, and the protest was disallowed.

This ended up being fairly ironic, given what happened next:

[In 1980, Walsh, who had emigrated to the US] was struck by a stray bullet in the wake of a robbery attempt of a Cleveland, OH discount store while unloading her shopping cart to her car. Her autopsy revealed she had mosaicism, which meant that, chromosomally, she was mostly, but not all, male but had androgynous [enough] looks to live her life as and be raised female.

However, some argue it was transgender athletes, and not Ratjen, who were the catalyst for more thorough gender testing.

Shortly after the accusation that Stephens was a man her team coach, Avery Brundage, called for more systematic screening of suspicious cases. But when he chose to point the finger at ‘suspicious’ cases, it was neither Ratjen nor Walsh that he named. Instead Brundage named the Czechoslovakian runner Zdenka Koubkova who had changed sex from female to male (becoming Zdenek Koubek) in 1936, and the British shot putter and javelin thrower Mary/Mark Weston. Ratjen and Walsh’s stories have been reinvented to fit narratives about the Cold War and the politicisation of sport; in so doing, the stories of Koubek and Weston have been lost.

Supposedly, both Koubek and Weston transitioned after having been unaware of the potential maleness of their anatomy during their competing years. From a 1937 article on sex changes:

For twenty-three years Zdenek [Koubek] lived as a woman – at one time as a corset fitter – an occupation which, as his nascent masculinity asserted itself, he found at times decidedly embarrassing. No one, except himself, doubted his femininity. However, in 1935, while he was wearing his running togs, suspicion as to his true sex arose. An investigation ensued. Shortly afterward (according to his story related to Gordon Kahn in the New York Daily Mirror), Professor Milosh Kilcka, head of a surgical institute in Podol, decided to emphasize Zdenek’s masculinity by means of an operation. The operation was so successful that the Czecho-Slovakian government officially sanctioned Zdenek’s transfer from the female to the male classification.

(Sidenote: decades later, East Germany’s doping program would have cause similar confusion for champion shot-putter Heidi Krieger, who is now Andreas. The Olympic gold medalist underwent gender reassignment surgery after the virilization from the steroids made him “unable to come to terms with his female gender role.”)

The decades of media speculation about Eastern Bloc men passing themselves off as females eventually led to the institution of gender verification testing, according to the Journal of the Royal Society of Medicine (pdf). The final straws were the Press sisters, Ukrainian track superstars who set a combined 26 world records. After dominating track and field for the Soviet Union in the 1960 and 1964 Olympics, both retired suddenly in 1966 – right when gender verification was introduced, as it happened. At the time, this pretty much confirmed the speculation that they were female impersonators, though medical scientists now think they, like Walsh, probably had some degree of mosaicism.

At that point, IAAF gender testing referred to physical, drop-your-pants inspection, called “nude parades.” By the time the IOC embraced gender testing, in 1968, both groups had moved on to testing chromosomes via buccal smear, called the Barr body test. The Barr test seems simple – an XX reading is fine, while an XY result indicates maleness, i.e. failure. But women with androgen insensitivity syndrome (AIS) have male chromosomes, while others have more than two chromosomes. For these reasons, the buccal smear test had a false positivity rate of something like 20%.  That didn’t stop it from ending the careers of several athletes. Ewa Klobukowska, a Polish track phenom in the late ’60s, was the first to fail the test:

[Klobukowska] won a gold medal for Poland in the 1964 Tokyo Olympic Games for the 4×100-metre relay, and a bronze medal in the 100-metre dash…. In 1967 she took an early defective form of the chromatin test and it registered that she had ‘one chromosome too many’. This brought her career as an international athlete to a close. Perhaps the test was mis-administered or misinterpreted, because she became pregnant and bore a son in 1968.

The IOC changed the test the following year. As Elizabeth McClung points out, those changing standards would have accepted Klobukowska as a female instead of stripping her of her medals (the IOC returned them in 1999). McClung also calls out the case of Spanish hurdler Maria Jose Martinez-Patino:

It used to be the IOC who policed this and elite female athletes needed to carry with them their ‘Certificate of Femininity.’ Like Maria Patino, who forgot her certificate at the 1985 World Games. Using a different test, she failed the retesting, due to being an XY female. Ignoring the advise to feign and injury, she came first. The test results came out and her medal were stripped, her records eliminated, her scholarship revoked, her fiance left and she was kicked off the National team. Her appeal took several years, but she finally got her second ‘Certificate of Femininity’.

Patino was also declared ineligible for the 1988 Summer Games in Seoul. Several years later, another test was introduced, though it too generated false positives – most notably in Atlanta, when eight female athletes failed – only to be cleared on appeal. Seven of these were intersex women. Since then, the IOC scrapped systematic testing altogether, though, starting in Beijing, it conducted testing on a case-by-case basis.

However, even as policies were relaxed, gender testing continued to result in crude determinations about an athlete’s sex. While Semenya is the most recent notable example, she’s not the only one. After winning a silver in the Doha Asian Games in 2006, Indian middle-distance runner Santhi Soundarajan failed a gender test and was stripped of her medal. She now works as a laborer at a brick kiln – paid women’s wages, nonetheless – after having attempted suicide in 2009. Soundarajan reportedly has partial or complete AIS – which means that, under the current IOC rules, she would be eligible to compete. Narayan Swamy highlights the difference in how the women’s cases were handled:

The 21-year-old Semenya will be her country’s flag-bearer at the London Olympics. Her outraged nation rallied around her. South Africa fought to safeguard Semenya’s dignity and position in world sports. The result: last year, the International Association of Athletics Federations revoked the ban on her. Unfortunately for Santhi, no such help was forthcoming for her from her own countrymen. Banned by the Athletics Federation of India from participating at any level, the then 25-year-old’s name and feats were struck off the records.

In preparation for London, the IOC recalibrated its policy once again, as we covered in previous posts, so that it now assesses both hormone levels and the body’s receptivity to androgen. (Nevermind that there’s no clear science that shows elevated testosterone levels giving female athletes unfair advantages.) This new policy would allow women with partial or complete androgen insensitivity like Patino or Soundarajan to pass without trouble, despite their Y chromosomes.

It doesn’t necessarily give Semenya a pass, since her body is said to be receptive to androgen, and it is rumored that she has undergone medical treatment to be eligible for competition. Regardless of what she’s been through, though, the runner seems more focused on nabbing a gold in her Olympic debut than on what the IOC will decided it thinks of her femininity.

(Photo: Caster Semenya of South Africa competes in the Women’s 800m Semifinals on Day 13 of the London 2012 Olympic Games at Olympic Stadium on August 9, 2012 in London, England. By Mike Hewitt/Getty Images)