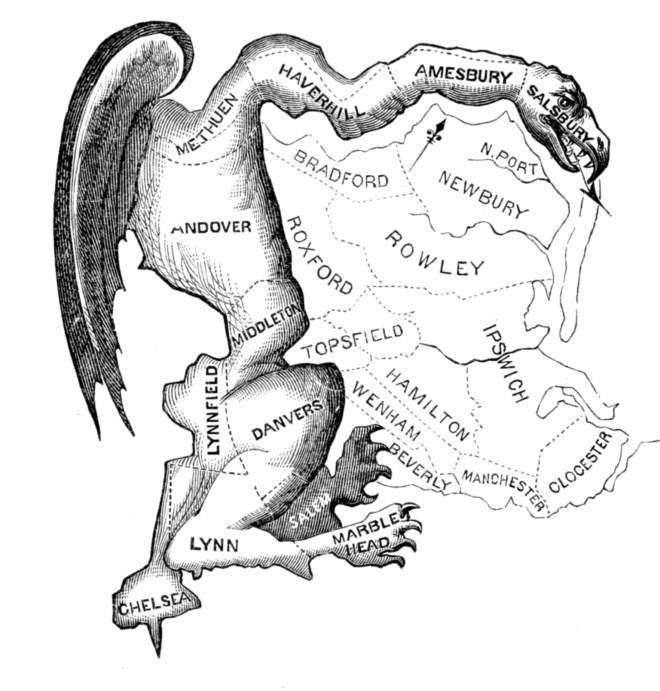 The great gerrymander of 2012 came 200 years after the first use of this curious word, which comes from the salamander-shaped districts signed into law by Governor Elbridge Gerry of Massachusetts. Gov. Gerry’s party engineered its electoral coup using paper maps and ink. But the advent of inexpensive computing and free software has placed the tools for fighting politicians who draw absurd districts into the hands of citizens like you and me.

And we have to use them. The one state which did not have congressional results skewed way out of line with the popular vote was California, which took these decisions out of politicians’ hands and into the California Citizens Redistricting Commission. I say “politicians” in general, because both parties are guilty at times – but it’s striking that by far the most abuse recently has come from Republicans:

Which is not surprising. The Republicans are losing demographically and are responding not by shifting their core positions – because they are effectively a religious organization founded on unalterable doctrines, and not a sane political party – but by rigging the system. Among the most rigged states? Virginia, Ohio and Florida. If this Congress had not been rigged, we would have a House with a GOP majority of only five or so. We’d have something called representative democracy.

(Above image: “Original cartoon of ‘The Gerry-Mander’, this is the political cartoon that led to the coining of the term Gerrymander. The district depicted in the cartoon was created by Massachusetts legislature to favor the incumbent Democratic-Republican party candidates of Governor Elbridge Gerry over the Federalists in 1812.” Cartoon From Wikimedia Commons.)