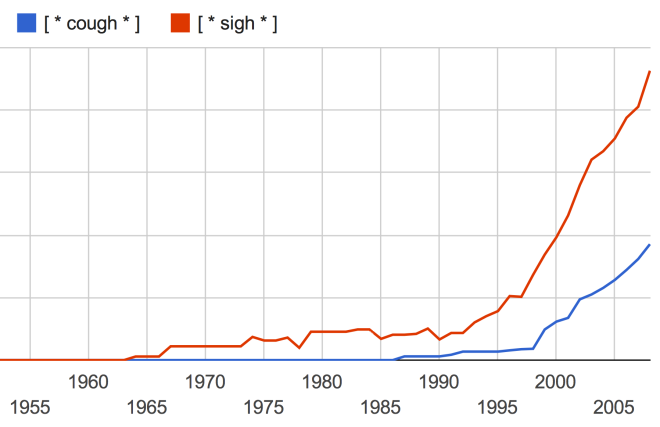 John Gruber noticed an asterisk-framed interjection (*cough*) in the New York Times and wondered about its roots:

Using asterisks this way strikes me as an Internet-ism. I would think those coughs should be italicized; using bounding asterisks is a substitute in plain text contexts, something we collectively started doing in email, newsgroups, web comments and forums, Twitter, and various other input fields where computer software doesn’t allow proper italics (or bold, or any other formatting).

With the help of Twitter, Gruber concludes *sigh* probably started in the 1960s thanks to the comic strip “Peanuts” and Charlie Brown’s constant invocation. Ben Zimmer traces longer usages (*hangs upside down like a bat*) to games like D&D:

As one “Role Play Manual of Style” explains, “Actions are enclosed in asterisks and written in third person perspective.” But this type of asterisking has thoroughly infected Usenet posts, blog comments, tweets, and anywhere else online that people feel the need to describe real-world actions in a virtual space.