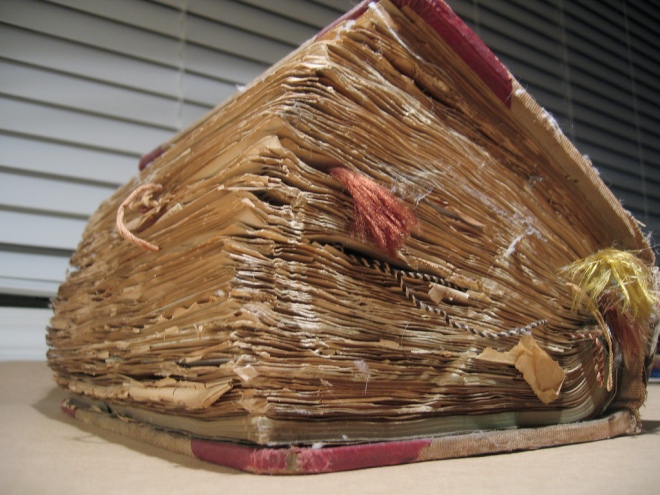 Reviewing Ellen Gruber Garvey’s Writing with Scissors: American Scrapbooks from the Civil War to the Harlem Renaissance, Christopher Benfey traces the history of the scrapbook in both its political and literary forms:

During the Civil War, Northern and Southern compilers of scrapbooks composed highly selective histories. Southerners combed the news for Confederate victories and sentimental accounts of happy darkies dreading the Northern invaders. The portrayal of black people changed overnight with the Emancipation Proclamation; liberated, they appeared in one popular poem as “brutal fiends, whose reeking knives / Would spare nor sex, nor youth, nor age.” Northern newspapers interspersed grim reportage of Shiloh and Chancellorsville with sappy poems that lamented boys killed in battle.

One legendary author excelled at the art and coined the term as we use it today:

Mark Twain was perhaps the king of American scrapbook culture. According to the OED, he was the first writer to use “scrapbook” as a verb, writing in 1881 about the origins of his book A Tramp Abroad, “I scrap-booked these reports during several months.” Prolific in inventing ways to lose money, especially in his attempts to predict how books would be published in the future (not, he found to his chagrin, with type fashioned from clay), Twain successfully marketed his own patented design for a more efficient scrapbook, outfitted with no-muss adhesive pages and an index awaiting entries.