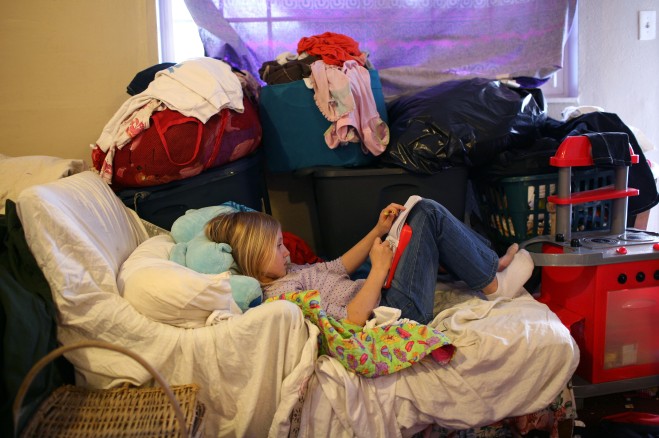 When families in Jefferson County, which encompasses Denver’s western suburbs, lost their home in the recession, they flooded a market that had the lowest number of rental vacancies in ten years. … Unable to find another home and unable to find space in the county’s shelters, which hold fewer than 100 beds, the new poor disappeared into the suburban landscape wherever they could find a roof. With nowhere else to go, they turned the Ramada Inn into an impromptu [single room occupancy].

(Photo: Izabella Nance, 7, works on a crossword puzzle in her motel room at the Old Town Inn March 5, 2009 in West Sacramento, California. Brittney Nance and her family were evicted from the house they were renting after her husband, Steve Nance, lost his job. The couple and their three children are living in a budget motel while they save enough money for deposit on a new rental home but are finding it difficult as they pay nearly $1200 a month for the motel room. All five live in a small studio sized room with most of their belongings. By Justin Sullivan/Getty Images)