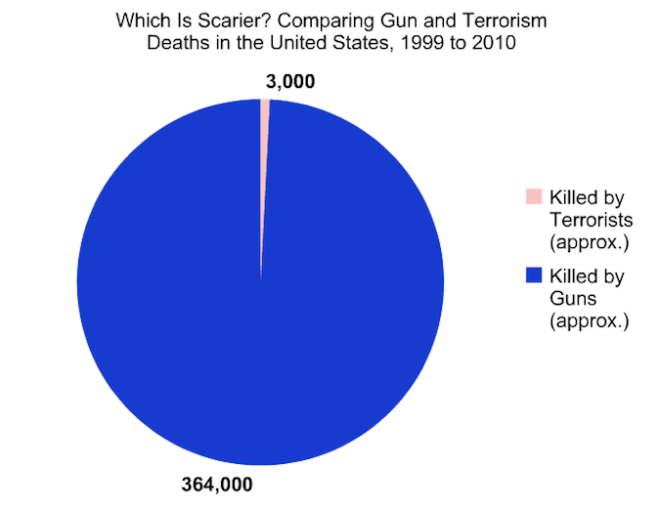 Conor Friedersdorf posts this chart, and shifts the debate to what seems to me more productive ground. The great opportunity of this moment is to start a debate about how we tackle terrorism as 9/11 gets more distant in the rear-side mirror, as we absorb the fact that the last decade has been far more terror-free than the decade before 9/11, when many of us thought we were living in an elysian fin de siecle. Now may be the moment, in other words, to examine the entire premise of Imaginationland.

Conor argues that “Americans would never welcome a secret surveillance state to reduce diabetes deaths, or gun deaths, or drunk driving deaths by 3,000 per year.” Barro hopes the NSA story will increase pushback against the post-9/11 mindset:

We don’t think about other social ills this way. Nobody says we should have a goal of zero heart disease deaths or zero auto accident deaths, because that would be nuts. We balance the objective of saving lives against other considerations, like cost and individual rights and the fact that bacon is delicious. We should apply this cost-benefit approach to terrorism too. This approach would allow us to say that the phone records dragnet can be a bad idea even if it saves lives. But the big resistance to that analysis doesn’t come from Congress; it comes from the American public.

And the trouble is: you wouldn’t know that from Glenn Greenwald, the Guardian or the NYT editorial board, would you? And yet this is the core issue. Without public support, this war cannot be unwound. Matt Steinglass compares the War on Terror to the Vietnam War:

[C]onventional terrorism poses no major threat to America or to its citizens. But that’s not really what it aims to do. Terrorism is basically a political communications strategy. The chief threat it poses is not to the lives of American citizens but to the direction of American policy and the electoral prospects of American politicians. A major strike in America by a jihadist terrorist group in 2012 would have done little damage to America, but it could have posed a serious problem for Barack Obama’s re-election campaign. For the president the war on terror is what the Vietnam War was to Lyndon Johnson: a vast, tragic distraction in which he must be seen to be winning, lest the domestic agenda he really cares about (health-care, financial reform, climate-change mitigation, immigration reform, gun control, inequality) be derailed. It’s no surprise that he has given the surveillance state whatever it says it needs to prevent a major terrorist attack.

If this contretemps prompts an actual discussion about whether we now need any sort of serious counter-terrorism policy (and anything serious would include searching huge databases for patterns), great. So lets have that debate. Are we now safe enough to end these programs? Are we finally saying we’d be fine with a terror attack that could have been foiled earlier because we prefer that only private businesses collect this kind of Big Data? Are we prepared to back a president who puts liberty before security – especially in the wake of a mass casualty event?

I think Conor has put his finger on the core issue here.

The trouble is that the only way to find out empirically whether the threat is massively over-stated is to reveal intelligence that perforce has to be secret. There is a genuine trap here. But it could be one in which the administration offers some serious answers. Instead of being entirely reactive, the president should make the case for the necessity of this system, and give us the actual trade-offs involved. I’m for transparency in most things; but I’m not so utopian as to believe that our society can function without some government – and personal and corporate – secrecy.

So instead of polarizing on this, lets debate it. Is Jihadist terrorism an overblown threat? If it is, unwind the apparatus slowly. If it isn’t, is this program better or worse than the practical alternatives? If we are not to occupy foreign countries (dumb) or torture prisoners (dumb and evil) or take out Jihadists by drones (increasingly counter-productive), isn’t mass data gathering about as anodyne a remedy for this ill as you can find?