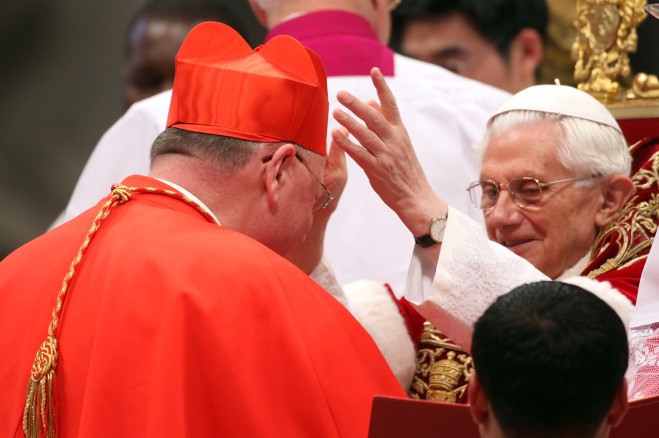 You know where this man is coming from when he dismissed the organization SNAP – Survivors Network of those Abused by Priests – as having “no credibility“. The records from his old diocese in Milwaukee show he authorized pay-offs to child-rapist priests to encourage them to leave the ministry. (In the Catholic hierarchy, you don’t report rapists to the police; you eventually offer them financial incentives to leave.) Nonetheless, at the time, Dolan insisted that these charges were “false, preposterous and unjust,” whatever the records or even the spokesman for his old diocese said. Now, in another piece of stellar reporting, Laurie Goodstein adds more context to this man’s record:

Files released by the Roman Catholic Archdiocese of Milwaukee on Monday reveal that in 2007, Cardinal Timothy F. Dolan, then the archbishop there, requested permission from the Vatican to move nearly $57 million into a cemetery trust fund to protect the assets from victims of clergy sexual abuse who were demanding compensation.

Cardinal Dolan, now the archbishop of New York, has emphatically denied seeking to shield church funds as the archbishop of Milwaukee from 2002 to 2009. He reiterated in a statement Monday that these were “old and discredited attacks.”

However, the files contain a 2007 letter to the Vatican in which he explains that by transferring the assets, “I foresee an improved protection of these funds from any legal claim and liability.” The Vatican approved the request in five weeks, the files show.

So, twice now, we have been forced to choose between his words and our lyin’ eyes, when it comes to questions of how he handled and cosseted child-rapists under his jurisdiction in Milwaukee. We now know he deliberately sequestered church assets so he could argue he had no more funds to compensate those raped by his subordinates. He was once again putting the institutional church’s interests above those of the raped. And he seems to be able to lie about all of it – in the face of massive evidence – with nary a flicker of hesitation.