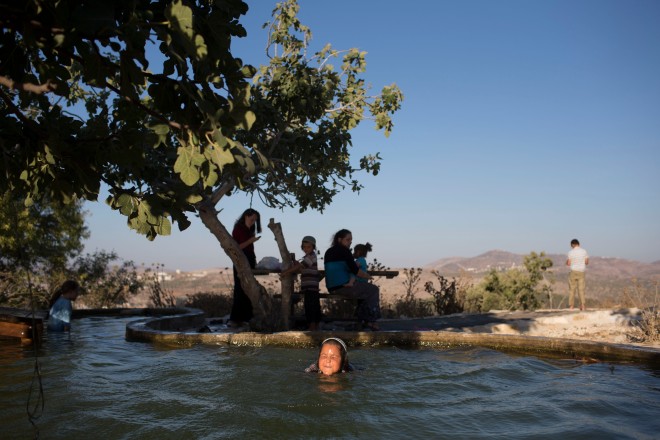 Jeffrey Goldberg believes – surprise! – that Kerry getting Israelis and Palestinians to sit down for fresh negotiations is “a fool’s errand” and that “the collapse of these talks, which is almost inevitable, could have dangerous consequences.” Nevertheless, Goldberg gives Kerry advice:

Kerry is understood in Israel as a true friend; his lobbying could be effective. If the Israelis would take small, unilateral steps on settlements, they could change the Palestinian calculus and improve Israel’s reputation (which has become a genuine national-security concern). On the other side, Kerry might want to try a bit more aggressively to help the Palestinian Authority become a viable governing body with a functioning economy and a bureaucracy that is reasonably free of corruption. Strengthening the Palestinian Authority (and working to weaken Hamas) while cajoling the Israelis to wean themselves from their addiction to settlements are two steps Kerry could take to advance negotiations.

Addiction to settlements? As if it’s some kind of compulsion rather than a long-thought-out, relentlessly implemented strategy for territorial expansion. And how on earth is Netanyahu able to take “incremental steps” when Goldberg himself concedes in the same column that

the Jewish settlement movement on the West Bank is now the most powerful political force in Israel. This is a movement whose leaders and Knesset representatives and cabinet ministers will subvert any peace process that would lead to the dismantling of even a single settlement, including any of the dozens of well-populated ones far beyond Israel’s West Bank security barrier.

As for a viable, much less corrupt governing body on the West Bank, let me simply quote Leon Wieseltier (as slippery as Goldberg on this subject):

Nobody lifted a finger to help Salam Fayyad, who was the Palestinian leader we were all waiting for. No Palestinians and no Israelis. He came and went. It’s a historical scandal of the first magnitude.

(Notice that Wieseltier has to blame the Palestinians as well, for fear he might stumble onto the truth about the settlements and their centrality to the problem.) And yet Goldberg returns to a critique that could have been made in the 1990s. (And Wieseltier, of course, like the entire American Jewish Establishment, was one of those who didn’t lift a finger even on his keyboard when we had a chance for progress five years ago. He preferred to go an an anti-Semite hunt, which is his default position on everything.) Maysoon Zayid notes the deliberately weakened position of the Palestinian Authority:

[President Mahmoud] Abbas, who will decide the fate of the Palestinians if Kerry and the USA have their way, has been a lame duck for the past four years. … Simply put, he is no Yassir Arafat. Unless this agreement on a two-state solution includes a Palestine with the ’67 borders, East Jerusalem as its capital, and addresses water rights as well as the right of return, it will not fly with the average Palestinian on the street or in the camps.

This is Netanyahu’s moment of truth. He can prove to all of his most vociferous naysayers and critics (me among them) that he is not just a politician passing his—and our—time in the prime minister’s office, but a leader who is capable of grasping the gravity of the situation; a leader capable of freeing himself of his trepidations, fears and secret advisers; a leader capable of understanding the critical need to rise above himself and establish a proper set of priorities; and, most important, a leader capable of shepherding the nation (or, at least a majority of it) to the right path. I have huge doubts as to whether Netanyahu is such a leader, but I will be the first one to praise him if he proves otherwise.

Yeah, right. I suspect Netanyahu would rather ethnically cleanse the West Bank than cede an inch of it. Stephen Walt predicts “a lot of talk, but ultimately no action”:

The Palestinians have nothing left to give up (save for symbolic concessions over the so-called “right to return”), and I can’t see Netanyahu offering them a deal that comes even close to a viable state. And while Kerry’s tenacity is admirable, I’ve yet to see any sign of a genuinely different U.S. approach. Remember: Assorted U.S. diplomats have spent thousands of hours going back and forth with both sides over the years and have ended up with bupkis. So I think we’ll see more talks, along with more settlement building, and ultimately no agreement. And then Obama and Kerry will be gone, and another “opportunity” for peace — if it even is one — will have been lost.

Which is the point, of course. Still, Shibley Telhami thinks peace talks are more necessary now than ever:

[T]he conflict remains the prism of pain through which Arabs view Washington and much of the world — even more so since the region’s uprisings. In October 2011, when I asked Arabs in Morocco, Egypt, Saudi Arabia, Jordan, Lebanon, and the UAE what two steps the United States could do to improve their view of Washington, 55 percent of respondents said “brokering Israeli-Palestinian peace” based on the 1967 borders, with 42 percent choosing “stopping aid to Israel” as the second step. In comparison, only 12 percent suggested providing more economic aid to the region, and 11 percent proposed greater efforts at democratization. In a 2012 poll in Egypt, 66 percent identified brokering peace followed by 46 percent who recommended stopping aid to Israel; only 12 percent suggested that Washington do more to spread democracy.

(Photo: A Jewish settler boy swims in a pool on July 22, 2013 near the Jewish outpost Settlement of Har Bracha, West Bank. By Uriel Sinai/Getty Images)