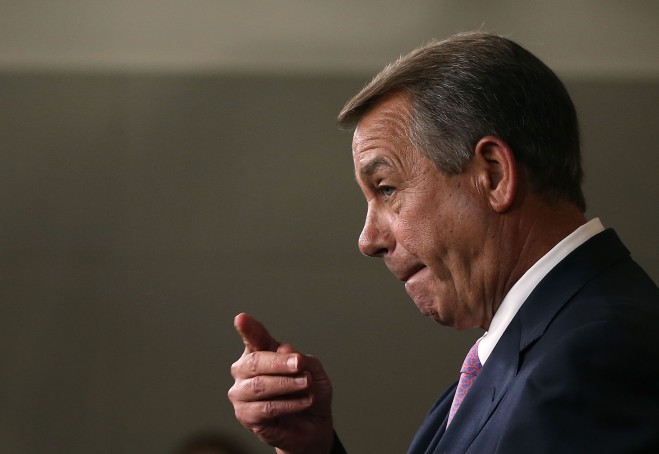 “Some of my Republican colleagues are already saying we won’t raise the debt limit unless there’s repeal of ObamaCare. I’d love to repeal ObamaCare, but I promise you that’s not going to happen on the debt limit. So some would like to set up another one of these shutdown-the-government threats. And most Americans are really tired of those kinds of shenanigans here in Washington,” – Senator John McCain.

What stands out to me – again – is the nihilism of it all. A candidate ran for president on a platform for a right-of-center plan for universal

health coverage, much more incremental than the Clintons’ proposal, far less statist than Nixon’s, and adopting several conservative ideas – such as the healthcare exchanges which already seem to be bearing fruit in lowering premium prices.

He got it through the Congress, was re-elected solidly, his own party won the popular vote in both Houses … and the GOP in the House is effectively threatening to sabotage the economy and the government’s fiscal stability to cut off its funding. What do they intend to do about tens of millions of people without insurance (or more than ten million people living in this country without papers)? Not a single thing – except bromides against big g0vernment that could have been uttered (and were) in the 1980s.

Whatever else this is, it is emphatically not an opposition party in a democratic system.

It is a nullification party, unable to pass anything itself but endless, fruitless repeals of the ACA, incapable of supporting immigration reform as well as health reform, eager to deny the president even his own executive officials, and abusing the filibuster to make any kind of progress in addressing what few deny are real problems. This is a protest movement – not a democratic opposition. It’s acting out, not opposing.

And its only rationale is to drag this president down, even if it means, as it has, that their own reputation is at record lows. And they are having some small effect as Americans understandably look at Washington’s mess and throw up a little in their mouths.

What can the president do? He’s decided to go out on the trail again urging more action on the economy and rightly touting his economic stewardship as the most effective in the West since the crisis began. He’ll be trying to reach precisely those Americans who need health insurance when the new law comes into effect.

It turns out the election meant nothing to the GOP. Their contempt for the public as a whole – and not just their primary voters – is palpable. And their positive contribution to the issues facing this country and the world are non-existent.

(Photo by Getty. Graphs of Obama’s and the Congress’s approval ratings, from Pollster’s poll of polls.)