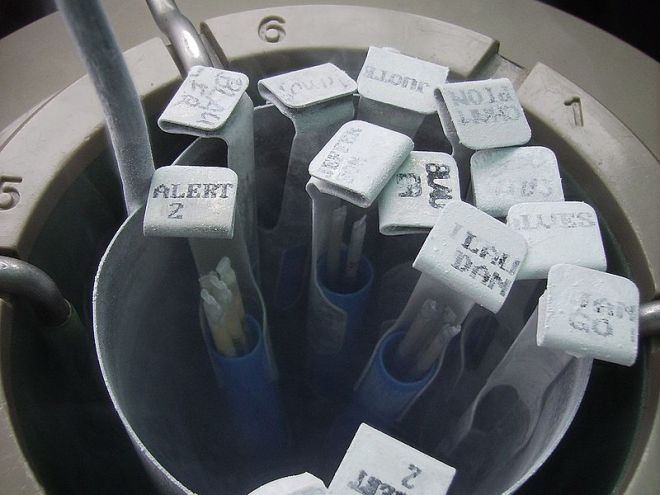 Jesse Hirsch reports from the USDA’s strategic livestock-semen reserve in Colorado, which holds about 700,000 frozen samples from cattle, bison, goats, pigs, elk, and other animals:

Every straw has a story. There are 30,000 salmon milt samples, obtained from the Nez Perce tribe in Idaho. There’s rare sheep semen from Kazakhstan, near sheep’s center of domestication. There’s even a full backup of 20,000 exclusively bred cows on the Island of Jersey, progenitors for Jersey cattle all over the globe.

So where does it all come from? Universities, companies and private collectors often donate semen to the NAGP. Other samples are tracked down by Blackburn and his colleagues. One woman in Broken Bow, Nebraska, had a rare breed of cattle dating back to the 1940s. “We called this farmer, asking for semen from her bulls,” Blackburn says. “She picked up the phone and said, ‘I thought you’d never call.’”

The archive includes “rare and vintage” seed, but don’t accuse the USDA of snobbery: Hirsch reports that “everyday strains are just as important as the heirloom semen, if not more so.”