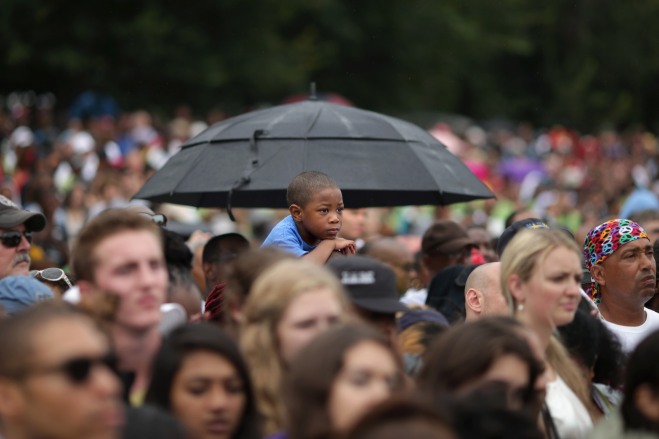 A few readers push back against the criticism we aired earlier:

Regarding Obama’s big speech yesterday, it was fabulous. In other words, I think the pundits are full of it. They’re upset that he didn’t get specific with policy proposals? I call bullshit. I went back and read MLK’s original. Not a whole lot of specifics in there either. I counted not a single policy proposal. MLK’s speech was a true oration. And so was Obama’s yesterday.

Near the end, when Obama said, “That’s where courage comes from,” tears came to my eyes. He moved me. He zoomed out and showed that this day isn’t about Martin Luther King. Obama made it clear this wasn’t just about black versus white. He included all of us. If anything could be called a theme of his term in office, it’s this spirit of the collective – the community. It’s not about any one man. We’re all in this together.

Another also liked the speech:

It made me think of his first inaugural address. I recall I was driving to the airport and had to keep switching stations. I was at first disappointed because I didn’t hear a capital-Q quote – an “Ask not what your country can do for you” or “The only thing we have to fear”. But the speech made me think.

Sometimes an inaugural quote (small-q, admittedly) will pass through my mind (e.g. “greatness is never a given”, “we rejects as false the choice between our safety and our ideals”). I think his speech yesterday will be in the same vein – no capital-Q, “I have a dream” lines, but enough good stuff to make you think.