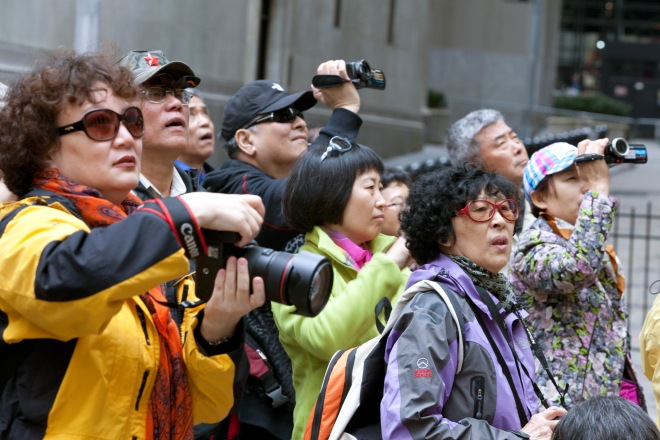 I’m surprised a dissent like this one didn’t come sooner:

This thread has gotten really ugly really fast. Your blog is now (once again) becoming a place for undiluted bigotry. There are BILLIONS of Chinese people. Is it really proper to tar that whole group with a broad brush because a small number of Chinese tourists have acted badly? (I’m glad my ethnic heritage allows me to be coy about my nation of origin; if I want to pretend I’m Canadian overseas to avoid anti-American bigotry, I have that option.)

A reminder that all the anecdotes from Dish readers are based in a broader reality, not mere stereotype:

Recent examples [of Chinese tourists behaving badly], which have sparked a firestorm of commentary in both Chinese and Western media, include a group of snorkelers who caught and ate endangered sea creatures off the Paracel Islands, visitors to North Korea who threw candy at North Korean children as if they were “feeding ducks”, swimmers who took pictures with a dying dolphin, and a teenage boy from Nanjing who scratched graffiti on a 3,000 year-old relic while touring Egypt with his parents. In response, Chinese officials are making a concerted effort to improve the behavior of Chinese travelers abroad, issuing a list of guidelines that include no spitting, cutting lines, or taking your shoes and socks off in public. Vice Premier Wang Yang has stated that “improving the civilized quality of the citizens” is necessary for “building a good image” for the country.

As the thread has shown repeatedly, the perceived rudeness of Chinese tourists is a symptom of the PRC’s rapid ascension as a wealthy nation – a nation that now has the disposable income to enable a middle class to join the global tourism market in droves. So the thread, in a way, is actually a tribute to China. Its newly-prosperous people, like others before them, just need time to acclimate to the etiquette of traveling abroad. And after all, as our first post pointed out, “Americans are still widely viewed as the world’s most obnoxious tourists.”

Back to the thread: Many readers are recommending a wonderful essay by Evan Osnos, who accompanied a Chinese tour group through Europe a few years ago:

Until recently, Chinese people had abundant reasons not to roam for pleasure. Travelling in ancient China was arduous. As a proverb put it, “You can be comfortable at home for a thousand days, or step out the door and run right into trouble.” Confucius threw guilt into the mix: “While your parents are alive, it is better not to travel far away.” Nevertheless, ancient Buddhist monks visited India, and Zheng He, a fifteenth-century eunuch, famously sailed the emperor’s fleet as far as Africa, to “set eyes on barbarian regions.”

Over the centuries, Chinese migrants settled around the world, but Mao considered tourism anti-Socialist, so it wasn’t until 1978, after his death, that most Chinese gained approval to go abroad for anything other than work or study.

First, they were permitted to visit relatives in Hong Kong, and, later, to tour Thailand, Singapore, and Malaysia. In 1997, the government cleared the way for travellers to venture to other countries in a “planned, organized, and controlled manner.” (China doles out approvals with an eye to geopolitics. Vanuatu became an approved destination in 2005, after it agreed not to give diplomatic recognition to Taiwan.) Eighty per cent of first-time Chinese travellers went in groups, and they soon earned a reputation as passionate, if occasionally overwhelming, guests.

Back to the inbox, a reader underscores a cultural rift between people from Hong Kong and those from mainland China:

Oof, your thread hits really close to home for me. I suspect that you guys have been getting droves of emails with horror stories about badly-behaved Chinese travelers blazing paths of destruction all around the world. While I don’t have any novel reasons about why some Chinese tourists behave so badly, I wanted to share my perspective as a Hong Konger who encounters many mainlanders daily (I live right next to a mid-market shopping outlet which has become a popular tourist destination).

As a former British colony, Hong Kong already has a complicated enough relationship with its current overlord. Political differences aside, though, a whole lot of Hong Kongers truly resent the increasingly heavy presence of the mainland Chinese here. There is a perception that they are responsible for (or exacerbate) many of the city’s social ills: wealthy mainlanders snapping up new apartments in HK as real estate investments and thus driving up housing costs for everyone; “parallel traders” who travel from China to Hong Kong every day and buy out entire stores’ worth of infant milk formula (a good that is much more expensive on the mainland than in Hong Kong, so a tidy profit can be made by reselling it across the border), leading to a shortage of formula for HK mothers; pregnant mainland women entering Hong Kong on tourist visas to give birth in Hong Kong hospitals, etc, etc.

And then there are the mainland Chinese tourists.

Unlike the parallel traders and the nouveau riche apartment collectors, who are largely seen as takers but not contributors to the city, Hong Kong benefits from the money of Chinese tourists (who accounted for a whopping 72% of HK’s tourists in 2012) – but very, very begrudgingly so. (Irony #1.) The reason for the animosity? There is a concept in the Chinese language called “公德心” (pronounced gong duk sum in Cantonese, gong de xin in Mandarin, and many Cantonese blogs and forums also write it this way: “公得心”), which roughly translates into “consideration for the public.” This concept acknowledges that every individual is ultimately part of a collective, and as such we each have the responsibility to take good care of the collective. In practice, someone who has 公德心 is always aware of the effects of his/her behavior on others who share our public spaces, and is careful to respect the way those spaces should look/sound/smell. Now, this isn’t an idea that is exclusive to Hong Kong, but a common refrain among its denizens is that the majority of mainland Chinese tourists simply do not have 公德心 when they should.

When we say that mainlanders lack 公德心, it means that they talk too loudly in public, spit on our sidewalks, push and shove on public transportation, and jump queues (this last one is 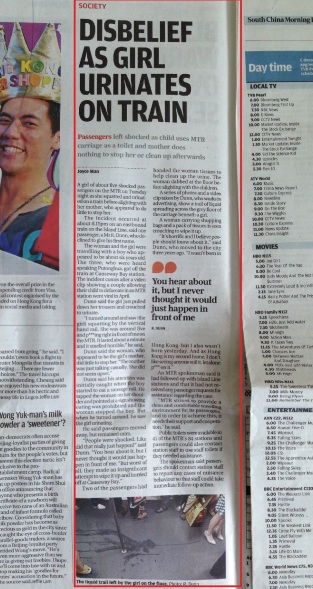 especially infuriating because there is always a sizable line for anything you want to do in Hong Kong, whether it’s for McDonald’s or tickets to see the Big Buddha or adding more money to our Octopus cards). Where things should be orderly, people without 公德心 bring chaos. Just a couple of weeks, ago, the South China Morning Post published an article entitled “Disbelief as Girl Urinates on Train” – along with a reader-submitted picture, no less! – about an unidentified mainland child who with the permission of her mother pulled down her pants and peed in a MTR (subway) carriage. Funnily enough, the collective disdain for the ill-mannered mainland Chinese rube has fostered not only a sense of anti-mainland prejudice but a sort of Hong Kong “pride” (Irony #2): many think (whether rightly or wrongly) of Hong Kongers as being more polite, cultured, classy–a better strain of Chinese people overall. We cluck our tongues when even North Korea shakes its head at Chinese tourists; we feel validated whenever some other country’s citizens point out how rude they can be.

Of course, the kicker is that even while many Hong Kongers agree with the stereotypes and feel superior for being from Hong Kong, they are also terrified of being mistaken for mainlanders when they travel overseas. (Irony #3.) It was mentioned in this thread that mainland Chinese tourists often join together in big group tours because it is easier to get visas and easier to navigate cultural/linguistic barriers; Hong Kongers often do the same thing for the same reason. I myself am traveling to the East Coast with my mother and my 79-year-old Malaysian great-aunt in September to visit my brother. All three of us speak English fluently, but even my normally mild-mannered and even-keeled mom has voiced concerns about how we can best avoid looking like mainland tourists and what to do if someone hurls anti-Chinese slurs at us. So I suppose this is just one more grievance Hong Kongers have against the impolite mainland tourist: they make the rest of us ethnic Chinese look bad, too. (But we’ll gladly take their dollars.)

Finally, I just wanted to respond quickly to your reader’s story about the older Chinese couple traveling to Adelaide: it may be the case in Chinese culture that the young are hesitant to criticize the old, but a grown child should not be allowing his parents to perform all the physical labor, either. True filial piety would have dictated that an able-bodied adult son pick up the luggage off the carousel at the direction of his parents. My mom probably would have smacked me if I’d let her struggle and fall all over the bags while I watched from the back.