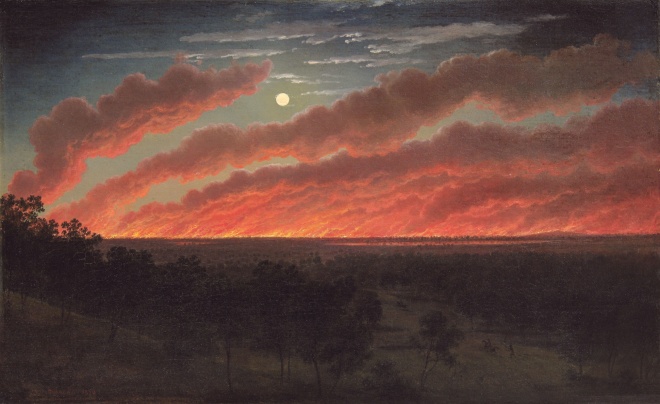 Michael Prodger highlights a new Royal Academia of Art exhibit, Australia, which showcases the painting produced since the continent’s colonization:

The point of the exhibition, with more than 200 works, is to provide an overview of two centuries of paintings that have been little seen or appreciated outside Australia itself. The last two significant surveys here were held in the Tate and Whitechapel galleries in the early 1960s. While Aboriginal art, with its “dreaming” and “creation” themes, has had its moment in the sun as an artistic-anthropological hybrid, the tradition that stemmed from the first settlers has not had the same exposure.

This tradition, with its roots in 19th-century European painting, is based on the land. Kenneth Clark wrote: “In Australian landscape painting, as in all great landscape painting, the scenery is not painted for its own sake, but as the background of a legend and a reflection of human values.” The legend and values are Australia’s foundation myths — the blood and soil ocker mentality that grew from the hardscrabble life and the morally dubious origins of the first settlers. And like the Hudson River School in another young country, America, there is in Australian art a continuous sense of surprise and pride at the vastness of nature.