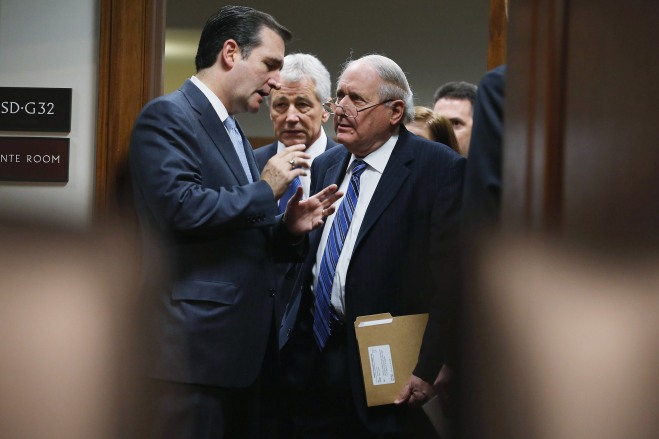 Despite the continued denialism of Goldberg and Hewitt, there are some glimmers of hope. The Houston Chronicle, for example, has recanted its endorsement of Ted Cruz [see reader clarification below]. Money quote:

When we endorsed Ted Cruz in last November’s general election, we did so with many reservations and at least one specific recommendation – that he follow Hutchison’s example in his conduct as a senator. Obviously, he has not done so. Cruz has been part of the problem in specific situations where Hutchison would have been part of the solution. We feel certain she would have worked shoulder to shoulder with Sen. Susan Collins, R-Maine, in crafting a workable solution that likely would have avoided the government shutdown altogether.

I remain skeptical that a party in this deep an ideological hole – with so many forces still arguing for more digging even up against a national default – is able to climb even slowly out. But this horrible political disaster for them must surely have some impact on purely political animals. Rarely has such a radical move been so definitively quashed (even if at the last minute) – and abhorred so broadly by the American people. That’s why Chait thinks we are making progress:

We can’t be certain Republicans will never hold the debt ceiling hostage again; but Obama has now held firm twice in a row, and if he hasn’t completely crushed the Republican expectation that they can extract a ransom, he has badly damaged it. Threatening to breach the debt ceiling and failing to win a prize is costly behavior for Congress — you anger business and lose face with your supporters when you capitulate. As soon as Republicans come to believe they can’t win, they’ll stop playing.

If the point of all this from Democrats’ perspective was to teach the GOP a lesson about not using shutdowns and the debt ceiling as leverage for policy concessions, I’m … pretty sure that that lesson has now been learned.

It might have been learned in different ways — e.g., tea partiers may conclude that what they need is a change of Speaker, not a change of tactics — but right now the thought of another round of brinksmanship and RINO/tea party recriminations makes me feel like Alex in “A Clockwork Orange” hearing Beethoven after the Ludovico technique. That is to say, I don’t think Reid needs to worry about sending the wrong message if he accepts a token GOP concession or two in exchange for raising the debt ceiling. Everyone knows who lost. Boehner won’t try this again soon.

But Weigel doubts the base will recognize its mistake:

[Y]ou can already see how the conservative base will remember this episode. It won’t be a story of Republicans making a huge strategic error and bumbling into an Obamacare-defunding fight without the votes to ever win. It will be a story of wimpy party leaders selling out. The shutdown would have been winnable if they hadn’t sold out.

I think Weigel has the better grasp of the fundamentalist denialism of the GOP base. And one has to wonder: if this fiasco does not deter them from their fanatical purism, what would? And if that is the case, and they continue to determine the future of the GOP, should the majority of the country not unite to consign that toxic faction to electoral oblivion?

The Houston Chronicle did not endorse Cruz OVER Hutchinson.  They endorsed him over Paul Sadler, a Democratic state representative, about whom the Chronicle had good things to say. Hutchinson was retiring from the Senate and Cruz had run against Lt. Gov. David Dewhurst in the Republican primary.  In that race, the Chronicle endorsed Dewhurst over Cruz. Yesterday’s editorial is a paean to Hutchinson, expressing a wish that she had kept her seat. It is not retro-active endorsement of Sadler who was not mentioned.